Stimulating a type of brain cell receptor launches a series of events that ultimately lead to the receptor’s deactivation in a subset of cells important for coordinating the activity of brain networks, report a team of scientists at the National Institutes of Health (NIH).

Future study of this sequence of chemical events may contribute to the increased understanding of such conditions as schizophrenia, depression, stroke and epilepsy and, ultimately lead to new treatments for these conditions. 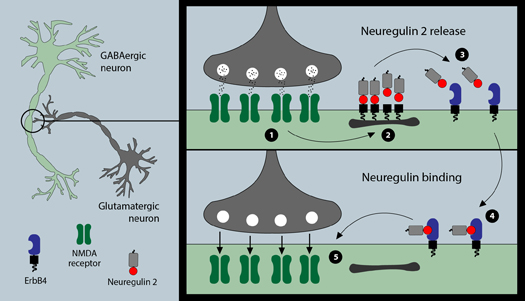 In many brain areas, networks of neurons are made up of two principle kinds of neurons: excitatory and inhibitory neurons. Excitatory neurons, or glutamatergic, neurons which trigger activity in brain networks, release the neurotransmitter glutamate. Inhibitory, or GABAergic, neurons serve to halt neuronal transmissions, and release the neurotransmitter gamma-aminobutyric acid, or GABA. These two classes of neurons are intimately connected and influence each other to fine tune brain network activity. A disturbance of this delicate balance is believed to play a part in such disorders as schizophrenia, depression, and bipolar disorder. The illustration shows that GABAergic neurons make Neuregulin 2, an activator of ErbB4. The cells store an inactive form of Neuregulin 2 on their surface. When glutamate binds to the NMDA receptor (1), it triggers the activation (2) and release (3) of Neuregulin 2. Neuregulin 2, in turn, binds to and activates ErbB4 (4). NMDA receptors are composed of several building blocks, or subunits, one of which is known as GluN2B. When Neuregulin 2 binds to ErbB4, it triggers the GABAergic neuron to internalize the GluN2B-containing NMDA receptors on its surface (5), preventing them from being activated by glutamate.

The receptor, called the NMDA receptor, is known to be involved in many aspects of normal brain functioning, including learning and memory, and in disorders such as stroke, depression and schizophrenia.   Earlier studies have shown that high doses of the drug ketamine block the NMDA receptor, resulting in delusions like those seen in schizophrenia. However, low doses of ketamine can alleviate symptoms of depression in a much shorter time than conventional treatments—hours, instead of weeks.

Neurons—the brain cells that form extensive networks in the brain—communicate via a relay system of molecules released from specific contact sites known as synapses. These molecules, called neurotransmitters, bind to receptors on the surface of recipient neurons to either increase or inhibit their activity.

The scientists learned that stimulating the NMDA receptor triggers the release of another molecule, Neuregulin 2, which binds to and activates its own receptor, ErbB4. Once ErB4 is activated, recipient cells absorb the NMDA receptors on their surface. In essence, NMDA and ErbB4 receptors form a negative feedback loop, preventing further stimulation of NMDA receptors.

“We’ve identified what appears to be a reciprocal relationship between the NMDA and ErbB4 receptors,” said the study’s senior author, Andres Buonanno, Ph.D., head of the NICHD’s Section on Molecular Neurobiology. “We believe we’ve uncovered a promising new lead that may yield important insights into a number of psychiatric disorders.”

Neurons—the brain cells that form extensive networks in the brain—communicate via a relay system of molecules released from specific contact sites known as synapses. These molecules, called neurotransmitters, bind to receptors on the surface of recipient neurons to either increase or inhibit their activity.

“ErbB4 not only depends on NMDA receptors for its activation, but ErbB4 acts to regulate the number of NMDA receptors on the cell surface, essentially forming a feedback loop,” said the study’s first author, Detlef Vullhorst, Ph.D.