Problems with neuregulins cause psychiatric, behavioral problems in mouse studies 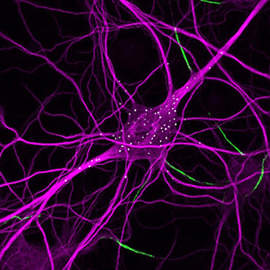 Brain proteins known as neuregulins are important for establishing normal brain activity, according to recent studies led by researchers at the National Institutes of Health. Genetic changes in neuregulins are thought to increase the risk of schizophrenia, but it is not understood how such changes might increase risk for the disorder.

Two new studies, one in the Journal of Neuroscience and the other in Molecular Psychiatry, shed light on the link between neuregulin function and schizophrenia:

Neuregulins, short for neuron regulators, include three members (neuregulin 1-3). Neurons are cells of the nervous system made up of a cell body with extensions, called axons and dendrites, that relay messages to other neurons. The gap between the end of one neuron’s axon and the tip of another neuron’s dendrite is called the synapse. Axons release chemical messengers called neurotransmitters, which traverse synapses and bind to receptors on adjacent dendrites. These synaptic signals are relayed along the dendrites to the cell body, where the neuron processes the signal and decides whether to send a neurotransmitter to other neurons.

Neuregulins modulate this process by activating a receptor, called ErbB4, on the cell’s surface.
For instance, GABA is a neurotransmitter that inhibits neurons, and neurons that produce it are called GABAergic neurons. On the other hand, dopamine is a neurotransmitter that fine-tunes how neurons react to other neurotransmitters, and neurons that produce it are called dopaminergic neurons. Problems with either of these neurons are thought to underlie neurological diseases, such as schizophrenia and epilepsy. In the new studies, researchers explored how neuregulins regulate the function of GABAergic and dopaminergic neurons, both of which express the neuregulin receptor ErbB4.

Researchers led by Andres Buonanno, Ph.D., of NIH’s Eunice Kennedy Shriver National Institute of Child Health and Human Development, build upon their earlier work and studied how neuregulins are produced and distributed in rat GABAergic neurons. They identified two groups of neuregulins, which differ in their physical structure and location.

In the Molecular Psychiatry article, the team explored how neuregulin 2 affects dopamine levels and behaviors related to psychiatric disorders. They created a line of “knock-out mice” that lacked neuregulin 2.

The researchers observed that neuregulin 2- deficient mutant mice developed behavioral problems similar to schizophrenia. In tests designed to measure memory, anxiety, activity levels, and other behaviors, the knock-out mice were hyperactive, had poor memory, and displayed antisocial behaviors, compared to genetically normal mice. Moreover, the knock-out mice had imbalanced dopamine levels in distinct brain areas, reminiscent of findings reported in schizophrenia patients. These results suggest that neuregulin-2 signaling could be important to maintain a proper dopamine balance in the brain and to regulate behaviors associated with schizophrenia.

“Taken together, these studies improve our knowledge of how neuregulins contribute to normal brain function at the level of the individual neuron, as well as brain circuits. Imbalances in neuronal circuits are thought to underlie the cognitive deficits observed in many neurological and psychiatric diseases, like epilepsy and schizophrenia,” said Dr. Buonanno. “Our discoveries highlight how neuregulins may contribute to these disorders and identify the neuregulin-ErbB4 pathway as a potential therapeutic target for schizophrenia.”