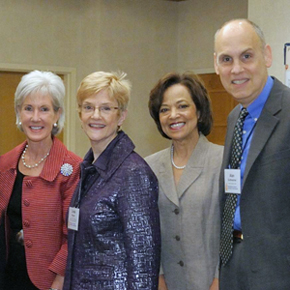 “The world’s health is not a zero sum game,” Health and Human Services Secretary Kathleen Sebelius said to the researchers in the NICHD Global Network for Women’s and Children’s Health Research. “What benefits one nation, benefits us all.”

Secretary Sebelius addressed the researchers at the Network’s Annual Steering Committee meeting this month. The Network, established by the NICHD and the Bill and Melinda Gates Foundation, seeks to prevent maternal and infant deaths and illnesses worldwide. Scientists from developing countries, together with those in the United States, lead teams that identify the health needs of an area and address those needs through randomized clinical trials to test treatments and interventions.

Secretary Sebelius commended the network researchers on their efforts, including a study that found a low cost drug to treat severe bleeding in women who have just given birth and their success in training health workers to resuscitate newborns.

She urged the attendees to communicate their findings to health officials in developing countries and to work with governments to create strong research partnerships. The Secretary also asked the Network to take on new challenges, such as finding ways to eliminate indoor air pollution from cooking fires and combat water borne diseases.

“There’s no wiser investment we can make than one in mothers and children,” she said.