Finding may lead to therapies that prevent pituitary tumor recurrence 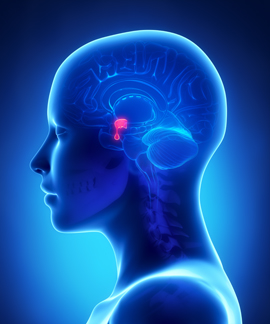 A small study by researchers at the National Institutes of Health suggests that mutations in the gene CABLES1 may lead to Cushing syndrome, a rare disorder in which the body overproduces the stress hormone cortisol. The study appears online in Endocrine-Related Cancer.

The excess cortisol found in Cushing syndrome can result from certain steroid medications or from tumors of the pituitary or adrenal glands. Symptoms of the disease include obesity, muscle weakness, fatigue, high blood pressure, high blood sugar, depression and anxiety.

Researchers at NIH’s Eunice Kennedy Shriver National Institute of Child Health and Human Development (NICHD), in collaboration with researchers at other institutions in the United States, France and Canada, scanned tumor and cell tissue from 146 children with pituitary tumors evaluated for Cushing syndrome at the NIH Clinical Center. Researchers also scanned the genes of tumors from some of the children. Investigators in France scanned the genes of an additional 35 adult patients with Cushing syndrome and pituitary tumors.

The research team found that four of the patients have mutant forms of CABLES1 that do not respond to cortisol. This is significant because, when functioning normally, the CABLES1 protein, expressed by the CABLES1 gene, slows the division and growth of pituitary cells that produce the hormone adrenocorticotropin (ACTH). In turn, ACTH stimulates the adrenal gland to produce cortisol, which then acts on the pituitary gland to halt the growth of ACTH-producing cells, effectively suppressing any tumor development. Because cortisol does not affect the four mutant forms of CABLES1 discovered by the researchers, these genes leave production of ACTH-releasing cells unchecked.

“The mutations we identified impair the tumor suppressor function in the pituitary gland,” said the study’s senior author Constantine A. Stratakis, M.D., director of the NICHD Division of Intramural Research. “This discovery could lead to the development of treatment strategies that simulate the function of the CABLES1 protein and prevent recurrence of pituitary tumors in people with Cushing syndrome.”

The study authors noted that the CABLES1 mutants were found in a small proportion of patients and that other genes have been implicated in pituitary tumor formation. They added that more studies are needed to fully understand how CABLES1 suppresses tumor formation in the pituitary gland.