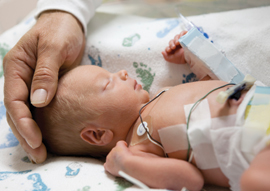 The antibiotic meropenem was approved by the U. S. Food and Drug Administration for treating abdominal infections in children less than 3 months of age.  The approval came after a study by a National Institutes of Health research network evaluated the drug in treating children in this age group.

The May 28 issue of The Federal Register described the study which supported the approval of meropenem for “complicated intra-abdominal infections” in children under 3 months of age.  Among preterm infants, intestinal perforation or leakage—which is part of complicated intra-abdominal infection—may be life threatening.  The study was undertaken under the terms of the Best Pharmaceuticals for Children Act, which directed NIH to conduct studies on drugs used in children but not previously tested in children or in specific pediatric age groups.

Meropenem is a broad spectrum antibiotic—effective against a wide variety of bacteria.  The drug has been previously approved to treat complicated intra-abdominal infections and complicated skin infections in adults and older children, and for treating children 3 months of age and older with bacterial meningitis—an infection of the fluid bathing the brain and spinal cord.  During the last several years, physicians have begun prescribing meropenem for preterm infants with serious abdominal infections.  Because they lacked an effective alternative, many physicians had prescribed the drug for a use other than what the FDA had approved.  The NIH study was undertaken in response to a written request from the FDA to evaluate the dosing and safety of meropenem in the treatment of complicated intra-abdominal infections in infants under 3 months of age.

“This study shows that meropenem is appropriate for treating complicated intra-abdominal infections in very young infants. In addition, we now have dosing guidelines for various age groups of premature infants,” said Anne Zajicek, M.D., Pharm.D., chief of the Obstetric and Pediatric Pharmacology and Therapeutics Branch at NIH’s Eunice Kennedy Shriver National Institute of Child Health and Human Development (NICHD), which funded the study.

Dr. Zajicek explained that physicians often need to extrapolate from studies of adults when prescribing for pediatric patients, because many drugs have never been tested specifically for use in children. However, because of their smaller size, differences in metabolism, and other physical differences from adults, many drugs may affect children differently than they do adults. Under the Best Pharmaceuticals for Children Act, NICHD works with FDA to identify drugs not tested in children to determine if they are appropriate for use in children.

The NICHD commissioned the study to investigate meropenem use in 200 infants under 3 months of age, including premature infants.  Researchers examined how the drug was absorbed and distributed throughout the body, and used that information to develop dosing recommendations for different age groups of infants, including premature infants of different ages.  In addition, the study evaluated side effects. Based on this study, treatment of infants with meropenem was safe and was not associated with increased risk for serious side effects.