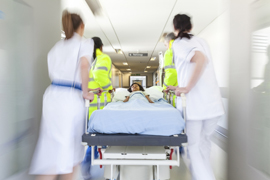 A large-scale, multicenter study has shown that emergency body cooling does not improve survival rates or reduce brain injury in infants and children with out-of-hospital cardiac arrest more than normal temperature control.

Therapeutic hypothermia, or whole body cooling, can improve survival and health outcomes for adults after cardiac arrest and also for newborns with brain injury due to a lack of oxygen at birth.  But, until now, this treatment has not been studied in infants or children admitted to hospitals with cardiac arrest.

The research findings were presented at the Pediatric Academic Societies Annual Meeting in San Diego and published simultaneously in the New England Journal of Medicine. The study was funded by the National Heart, Lung, and Blood Institute (NHLBI) of the National Institutes of Health.

"Our results show that therapeutic hypothermia is no more effective for treating children after out-of-hospital cardiac arrest than maintaining body temperature within the normal range, " said co-principal investigator Frank W. Moler, M.D., a professor in the Department of Pediatrics and Communicable Diseases at the University of Michigan, Ann Arbor. "Both treatments help to control fever and result in similar outcomes for patients."

More than 6,000 children suffer out-of-hospital cardiac arrest in the United States each year, according to the American Heart Association's 2015 heart disease and stroke statistics.  During cardiac arrest, the heart stops pumping effectively, and blood stops flowing to the brain and other vital organs.  In many cases, the outcome is death or long-term disability.

The study included 295 participants between 2 days and 18 years old who were admitted to children's hospitals for cardiac arrest, required chest compressions for at least two minutes and remained dependent on mechanical ventilation to breathe.

During the treatment, study participants lay between special blankets.  Pumps circulate water through tubes in the blankets to maintain specific body temperature ranges: either a lower range of 89.6–93.2 degrees Fahrenheit or a normal range of 96.8–99.5 degrees Fahrenheit.

One year after treatment, researchers observed no difference in survival or cognitive function between groups.

Out-of-hospital cardiac arrest in infants and children typically results from causes such as strangulation, drowning, or trauma.  A separate study by the same researchers is examining body cooling in hospitalized patients who suffer cardiac arrest, typically as a complication of a medical condition. A goal of both studies is preventing fever, which commonly occurs after cardiac arrest and can lead to more severe outcomes.

"The findings from these studies may well lead to evidence-based guidelines that will improve the quality and rates of pediatric cardiac arrest survival by using better treatments," said co-principal investigator J. Michael Dean, M.D., professor of pediatrics and chief of the Division of Pediatric Critical Care Medicine at the University of Utah School of Medicine, Salt Lake City. "Our hope is to identify the most effective treatment for preventing neurological damage or death in infants and children who suffer cardiac arrest."

The studies are part of the Therapeutic Hypothermia after Pediatric Cardiac Arrest (THAPCA) trials, a six-year effort that is the largest examination of therapeutic hypothermia in children other than newborns for any health condition to date.  The trials are funded through NHLBI cooperative agreements U01-HL-094339 and U01-HL-094345.

The THAPCA trials are conducted in partnership with the Collaborative Pediatric Critical Care Research Network, established in 2004 by the NIH's Eunice Kennedy Shriver National Institute of Child Health and Human Development, and the Pediatric Emergency Care Applied Research Network, established in 2001 by the Health Resources and Services Administration's Maternal and Child Health Bureau.

"Partnerships with these federally funded pediatric clinical research networks have been essential to the trials," said Victoria Pemberton, R.N.C., clinical trials specialist and THAPCA project scientist at NHLBI. "Through the networks, we have been able to mobilize researchers and clinicians throughout North America to answer important questions about a population with a rare health condition."

To interview an NHLBI spokesperson, contact the NHLBI Communications Office at 301-496-4236 or nhlbi_news@nih.gov.

The National Heart, Lung, and Blood Institute (NHLBI), part of the National Institutes of Health, plans, conducts, and supports research related to the causes, prevention, diagnosis, and treatment of heart, blood vessel, lung, and blood diseases; and sleep disorders. The Institute also administers national health education campaigns on women and heart disease, healthy weight for children, and other topics. NHLBI press releases and other materials are available online at www.nhlbi.nih.gov.

The Eunice Kennedy Shriver National Institute of Child Health and Human Development (NICHD), part of the National Institutes of Health, sponsors research on development, before and after birth; maternal, child, and family health; reproductive biology and population issues; and medical rehabilitation. For more information, visit the Institute's website at www.nichd.nih.gov.

The National Institutes of Health (NIH), the nation's medical research agency, includes 27 Institutes and Centers and is a component of the U.S. Department of Health and Human Services. NIH is the primary federal agency conducting and supporting basic, clinical, and translational medical research, and is investigating the causes, treatments, and cures for both common and rare diseases. For more information about NIH and its programs, visit www.nih.gov.