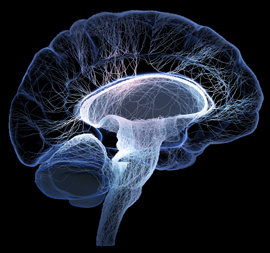 Barrett Whitener: Growing up poor affects the brain. That’s the conclusion of researchers from nine universities across the country who’ve completed the largest study of its kind to date. They found that the physical structure of children’s brains differ based on their parents’ income level. In more than 1,000 young people, ages 3 to 20, the researchers used magnetic resonance imaging (MRI) to measure the folds and pleats of the cortex—the part of the brain associated with thinking and intellectual skills. In general, more creases and folds—that is, more surface area—correlates with higher achievement scores. Children from the wealthiest homes had the largest cortical surface area, while children from the poorest homes had the least. The study appeared recently in the journal Nature Neuroscience.

Earlier studies have shown that income is linked to nutrition, health care, education, and other environmental influences that may affect the brain, such as exposure to cigarette smoke, chemicals, and general air quality. High stress levels, prevalent in low-income neighborhoods, also affect the brain. Other studies have shown that interventions to ease poverty, such as intensive preschool programs, boost education and income levels.

With us today to speak about this research is a lead author of the study, Elizabeth Sowell, director of the Developmental Cognitive Neuroimaging Laboratory and a professor of pediatrics at Keck School of Medicine at the University of Southern California.

Dr. Elizabeth Sowell: Well, thank you for having me.

Mr. Whitener: Let’s start with why you focused on income. Why was that the focus of your investigation?

Dr. Sowell: Well, we’ve known for a long time that children from less advantaged economic backgrounds have more difficulties with cognitive tasks, school performance. And we understood that this must, in some way, have something to do with the brain, given that the brain is what drives the cognitive function. So we had an opportunity to look at these relationships in a very large sample of typically developing children from around the country.

Mr. Whitener: And why do you think a child’s family income affects brain structure?

Dr. Sowell: Well, you know, we know that the brain develops over time, within an environment. We know that from, for example, from animal studies that animals raised in more enriched environments, with lots of toys to play with and friends and such, their brains develop differently than animals, for example, who are raised in a very deprived environment, without stimulation. So it makes sense that we would see something similar in humans, given that the brain develops within the environment that it has, right? And so it’s not the money itself, but we think that what money can buy is what is relating to why the kids from wealthier families have higher cognitive functioning skills and larger brain surface areas than children from less advantaged families.

Mr. Whitener: Now in the study, you wrote that the differences you saw are probably due to environmental factors. Could you elaborate a little bit on how the environment could play a role?

Dr. Sowell: Yes, so we know that, for example, from other studies, that things like nutrition and clean air and exercise and cognitive stimulation, all of those things help give the brain the input that it needs in order to wire the most efficient connections between different regions of the brain. So the brain develops over time, and it needs those experiences in the environment in order to determine which connections are the most efficient and which are most important.

Mr. Whitener: You also mention that many studies have shown that early childhood educational interventions result in higher education and income levels for graduates. Do you think that programs like that are actually changing brain structure?

Dr. Sowell: I think that the experiences that a child has—now the brain, it’s important to note that while more dramatic changes in the brain are happening earlier, there’s dynamic changes that continue well into adolescence in the brain. And if you think about it, anything from the outside that influences how the brain is developing can have a greater influence when things are changing a lot than, say, in adulthood when things are changing a lot less. So I think it’s likely that enriched experiences early in development do impact how the brain wires over time, but it’s important to note that it’s not too late to consider enriching experiences for children who are older, and their brains are still changing very dramatically. So I don’t want the notion to be that, while yes, earlier intervention—or, you know, enrichment of environment—is better, it’s certainly not too late to consider it later in childhood.

Mr. Whitener: Did you find exceptions in the study? Were there children from poorer homes whose brain structure matched that of children from wealthier homes?

Dr. Sowell: Absolutely. That is such an important question. The message is not, “Well, if you’re born into a poor family, your brain’s going to be smaller and there’s nothing you can do about it.” So certainly there were children among our poorest families, whose brains and cognition looked very much like the children in the wealthiest families, and vice versa.

Mr. Whitener: In the interim, before we’re able to nail down that information, is there something, based on your research, that you would suggest that society, or even parents or teachers, should be doing in the meantime?

Dr. Sowell: Yes, I mean I think that anything we can do—I mean, we can’t fix the problem of poverty given our limited resources. We can’t fix these problems by just giving—standardizing income for every family across the nation. But we could consider investing more community resources in the children in the poorest families.

It’s important to note, too, that while the relationship between brain surface area and family income was highly significant across the income range, the most significant changes were occurring in the poorest children. So the difference between, say, an income of $25,000 a year and $30,000 makes a big difference in those poorer children, right? So that extra $5,000 could help make sure that we know where the rent is coming from, we can buy the groceries. Whereas if you’re making $150,000, an extra $5,000 isn’t going to make that much of a difference in your brain or cognition. It could be the difference between, you know, do we do a summer camp or guitar lessons this year?

Mr. Whitener: Well that’s very important information, and I look forward to your future work on this, as we all do, and to learning more about exactly what makes that distinction in the environment for young folks and for their brain structure.

Dr. Sowell: Yes, and that is absolutely the focus of research moving forward, doing a better job of trying to understand what is in these kids’ environments: What kinds of schools? What kinds of air quality do they have? You know, how do they interact with their parents? So that is really something that, as a community of neuroscientists, we’re really moving forward, going to be paying a lot more attention to what environmental factors could be contributing to brain and cognitive development.

Mr. Whitener: Well, thanks very much for speaking with us today.

Dr. Sowell: Well, thank you for having me.