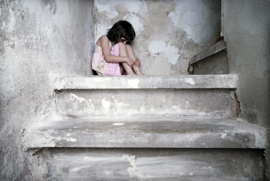 Barrett Whitener: Contrary to conventional wisdom, adults who were physically abused as children were no more likely to abuse their own children than were other adults their age. That’s the conclusion of researchers funded by the National Institutes of Health. Their study, which was published in the journal Science, relied on public records to identify children who had been physically abused back in the 1960s and ‘70s. In one of the longest-running studies of its kind, the researchers followed up several times, not only with the original abused children, now in their late 40s and early 50s, but also with their children. The adult children of the originally physically-abused parents were no more likely to have been physically abused than others their age. However, the children of the abused parents were more likely to have been neglected and to have been sexually abused.

From the National Institutes of Health, I’m Barrett Whitener. We’ve invited study author Cathy Spatz Widom of the City University of New York with us today, so that we might learn a little more about the implications of these findings. Thanks so much for joining us, Dr. Widom.

Mr. Whitener: First, the good news from the study is that the victims of physical abuse are not destined to grow up and become abusers themselves, as we’ve so often heard. Is that correct?

Dr. Widom: That’s right, but one of the things that I wanted to point out was that it’s very hard to measure child abuse and neglect. And so, what we have done in this study, which is unique, is to use three sources of information, which gives us a much better picture of what’s actually happening to the offspring of these individuals. So, we’re not just using official records; we are also using self-reports by the parents, and we also have looked at what the offspring of these individuals are telling us. So we put these three sources of information together, and we draw the conclusion then, that children who were abused or neglected in childhood are not at increased risk to physically abuse their own children, according to these three very different sources.

Mr. Whitener: Can you explain why there were more cases of neglect and sexual abuse among the children of the abused adults?

Dr. Widom: Well, we don’t know why. In fact, this is very much not really what we had expected. We expected that there would be a much higher incidence of physical abuse. I can only say that now that we have this new finding, we will be digging deeper into our data to find out why. I mean, it is possible that people are more willing to report neglect and sexual abuse. It’s more possible that child protection service agencies—that is, official agencies—are paying more attention to neglect and sexual abuse for other reasons that we don’t know about. But this is something clearly that we need to work on further in the future.

Mr. Whitener: You studied abuse cases among lower-income families. Do you think your results can be generalized to other groups, as well?

Dr. Widom: That’s a very good point. The sample that we studied are court cases—that is, cases that came to the attention of the courts for child abuse and neglect. And by and large, those cases are what we call skewed toward the lower end of the socioeconomic spectrum. But there were some smaller groups of middle- and upper-income families in the study. But, we still have to say to be careful about generalizing from this study to, for example, middle- and upper-class children who have been abused or neglected, particularly at the time that these children in this study were abused and neglected. Many of the middle- and upper-class families which might have had abuse would have been dealt with by private physicians.

So we don’t really know whether the experiences of those children are the same or different, and of course, there is the additional characteristic of poverty for many of these children that gives them another sort of adversity or challenge that they have to overcome as they grow up.

But we recognize and we emphasize that these findings should not simply be generalized to others outside of the study sample.

Mr. Whitener: Now, you mentioned a moment ago that one of the great strengths of your study is that you not only checked public records, you also asked parents whether they had committed abuse, and you asked their children whether they had been abused. Did the parents’ accounts, for the most part, agree with the children’s, or were there discrepancies between the two?

Dr. Widom: No, the parent accounts did not, and this is a really important finding for researchers working in the field. The parents did not report more physical abuse and sexual abuse, and only reported one indicator of neglect out of many. So, basically, they did not report any maltreatment of their offspring, and we gave them multiple opportunities to do so. Now, let me say that we have—part of the design of this study is a group of children who were similar to the abused and neglected children in terms of age, sex, race, and approximate family social class. We call them a matched control, or a comparison group. And what we found here was that the children who were abused and neglected and the match control group each reported that they engaged in these—in maltreatment, but they didn’t differ. So, we had expected that the parents who had histories of abuse and neglect would have reported more physical abuse, sexual abuse, and neglect of their own children compared to the match controls. But they did not.

Now, interestingly, when we ask the offspring if they had been abused and neglected, they told us that they had been sexually abused and neglected, and that child protection services had been concerned about them at some point in their lives, at higher rates than the children of the non-maltreated parents. So, what we found was similarity between the official records and the offspring report, but serious discrepancy between what the parents told us and these other two sources.

What is puzzling to me is that there was no difference between the adults—the parents—with histories of abuse and neglect and the adults without those histories. So it may be that these ways of interacting with children, or maltreating children, are more common than we think, and that they may not come to the attention, for example, of the authorities to the extent that we see reported here.

And the other thing that we learned is that there may be some surveillance bias or detection bias, so that if you are in a family which has come to the attention of officials for a history of abuse or neglect, you may be under greater scrutiny and you may be getting more services. But, there are more opportunities then for people in official capacities, for mandatory reporters, to be concerned about what they see happening. But, in a family without that history, those experiences, those—that maltreatment may be going on, but not coming to the attention of authorities.

Mr. Whitener: What do your findings mean, do you think, for people in child protective services, and others who deal with real or suspected instances of child abuse?

Dr. Widom: I think what these findings suggest is that we need to be more careful, or we need to be careful that we don’t pay particular attention to families with histories of abuse and neglect to the exclusion of families without. And in my experience, one—it’s common to hear someone in child welfare saying, “I remember when the mother of this child was brought here for such and such.” So what the—some of these findings suggest is that children in these families are more likely to come to the attention of child protection service agency workers. And I think we need to recognize and examine carefully whether the behaviors that we’re suspecting reach the threshold, the appropriate threshold that we need to do something about it. But we also need to recognize that when other cases are reported that don’t have those histories, that we pay the same sort of careful attention to those cases as well.

Mr. Whitener: Do your findings have implications that could be helpful for adults who have themselves survived abuse or neglect and who may be listening to us?

Dr. Widom: Yes. I think, first of all, the important message, first, is that we did a very careful, comprehensive assessment of the extent to which individuals with histories of abuse and neglect went on to become maltreating parents or maltreating adults themselves. And what we found was that it was not inevitable, not deterministic, not the majority, of these cases—even if we discount the parent reports and we look at the reports of offspring, which were higher, and we look at the child protection service reports. So, that’s a really important finding, and it has this important message that you shouldn’t—one shouldn’t, if you have a history, that you shouldn’t necessarily feel that you’re bound to continue in this cycle of maltreatment.

The other message, I think, is that if you feel that you have the potential, or you are losing control, if you are neglecting a child for whatever reason, that it’s important to go and take advantage of resources that we have available in this country to, I would say, to give yourself the skills so that you don’t need to, or you don’t fall into, perpetrating this cycle of abuse on the next generation.

Mr. Whitener: Well, thanks so much for talking with us about your study today, and I’m sure it’s going to be very helpful to a lot of people.

Dr. Widom: Great, thanks for inviting me.

Mr. Whitener: I’ve been speaking with Cathy Spatz Widom of the City University of New York.