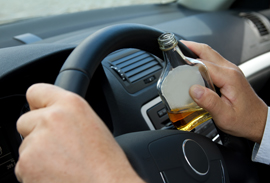 At-risk young adults who scored higher than their peers on a questionnaire that measures impulsive personality traits had a higher chance of engaging in reckless and impaired driving, according to a study by researchers at the National Institutes of Health and other institutions. If confirmed by other studies, these findings could serve as the basis for developing a screening test to identify impulsive young drivers who could benefit from prevention programs to reduce risky behaviors.

The study was conducted by Jeremy W. Luk, Ph.D., of NIH’s Eunice Kennedy Shriver National Institute of Child Health and Human Development and colleagues. It appears in Personality and Individual Differences.

The study authors noted that earlier research has shown that young adults are more likely to engage in risky driving than individuals of other age groups and that nearly 14 percent of U.S. traffic deaths in 2013 involved young adults. Previous studies also have found that impulsivity is associated with risky driving in young adults. However, these earlier studies have been conducted largely among college students, and it is not known whether their results apply to other groups, such as young adults with a history of substance use and behavioral problems.

Impulsivity is thought to be a complex personality trait with several distinct facets. The researchers relied on the UPPS-P model to evaluate impulsivity among participants in their study. The model describes impulsivity as having these components:

The researchers administered a questionnaire to 1,100 young adults from 18 to 30 years of age who were in either a residential or outpatient drug treatment program, who had been involved with the criminal justice system, or who had attended a school for teens with behavioral problems. For each impulsivity facet, the participants were asked to state how strongly they agreed or disagreed with a given statement. For example, participants responded to statements such as “My thinking is usually careful and purposeful” and “Before making up my mind, I consider all advantages and disadvantages.”

The researchers hope that the UPPS-P scale could one day be used to identify youth at risk for driving under the influence or driving recklessly and that interventions could be developed to reduce this risk.

Luk, JW, et al. Unique and interactive effects of impulsivity facets on reckless driving and driving under the influence in a high-risk young adult sample. Personality and Individual Differences http://doi.org/10.1016/j.paid.2017.03.048