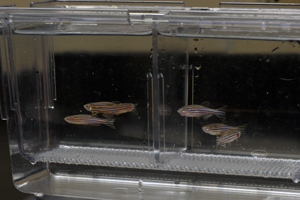 Lack of vitamin E may contribute to cognitive disorders by robbing brain cells of a substance important for their structure, according to a study of zebrafish funded by the National Institutes of Health.

The study, conducted by researchers at Oregon State University in Corvallis, appears in the Journal of Lipid Research

Vitamin E protects cells from molecules known as free radicals, which can damage cells.  Free radicals result from many natural biochemical reactions in the body and also from environmental exposures, such as cigarette smoke, air pollution, and ultraviolet radiation from the sun.  Many segments of the U.S. population have low levels of the vitamin.  Studies have indicated that the vitamin E may play a role in protecting against heart disease, cancer, and eye disorders.

Some researchers have theorized that, over time, damage from free radicals might contribute to the neurological deterioration seen in Alzheimer’s disease and other disorders of cognitive decline.  One study found that vitamin E could slow the progression of mild-to-moderate Alzheimer’s disease.

In their study, Maret Traber and colleagues at Oregon State University fed zebrafish a diet without Vitamin E for 9 months, then examined their brains for changes in brain lipids—key molecules in the membrane of neurons.  When compared to zebrafish fed a diet with sufficient vitamin E, the E-deficient fish had major differences in lipids containing docosahexaenoic acid (DHA), a nutrient important for brain development and function.

The E-deficient fish had about a third less of the form of DHA known as DHA-PC, a component of the brain cell membrane.  Similarly, zebrafish deprived of vitamin E had higher levels of hydroxy-DHA-PC, which can form after exposure to free radicals.  The researchers believe it is possible that, without vitamin E to counteract the free radicals, the free radicals reacted with DHA-PC, changing it to hydroxy-DHA-PC.

on the university’s Web site.

The study authors also found that the vitamin E-deficient fish had lower levels of lyso PLs (lysophospholipids), compounds that join with Vitamin E to carry DHA into the brain.

“You can’t build a house without the necessary materials,” Dr. Traber said.  “In a sense, if vitamin E is inadequate, we’re cutting by more than half the amount of materials with which we can build and maintain the brain.”

The study authors are studying vitamin E deficiency in zebrafish embryos to gain insights into how a shortage of the vitamin might affect the developing brain.  The human fetus, especially during the last trimester of pregnancy, has high DHA requirements.

Food sources of vitamin E include sunflower, safflower, corn, and soybean oils, nuts, such as almonds and peanuts, sunflower seeds, and green leafy vegetables.  The vitamin is available as a supplement but high doses of the supplement form may increase interfere with blood clotting and increase the risk for bleeding in the brain.

Zebrafish have many genes in common with human beings and so researchers often study them to gain insights into human disorders and conditions.  The NIH video, Zebrafish: A Key to Understanding Human Development, shows the importance of zebrafish in developmental research.