Energy production in mitochondria—structures within cells that produce energy from oxygen and nutrients—relies on a group of proteins previously not linked to this process, according to a study led by researchers at the National Institutes of Health. The findings may help researchers identify gene mutations that lead to defective mitochondria, which underlie several diseases. The study was published in the April 4, 2017, issue of Cell Metabolism. 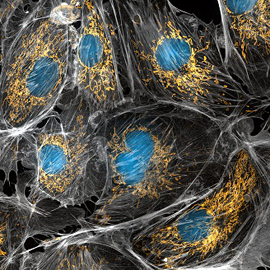 In this photograph of cow cells, mitochondria are marked yellow, nuclei are blue, and the cytoskeleton is gray. Credit: Torsten Wittmann, University of San Francisco

Mitochondria are rod-shaped structures that generate most of the energy the body needs. When mitochondria fail, organ systems can fail. The brain, heart, lungs, and muscles require the greatest amounts of energy and so are most affected by mitochondrial problems.

Mitochondrial diseases occur in children and adults and affect each individual differently. Symptoms can include mild to severe developmental delays, as well as problems walking, talking, seeing, and digesting food.

Within the inner mitochondria membrane, five protein complexes (called Complex I-V) carry out chemical reactions that drive energy production. The complexes generate energy by creating a difference in electrical charge. To create this difference, the complexes need iron-sulfur clusters. However, before the current study, researchers did not understand how iron-sulfur clusters reach their destination.

“Mitochondrial diseases can be difficult to diagnose because symptoms vary between individuals and can involve multiple organ systems,” said Dr. Rouault. “Our findings reveal additional genes that, if confirmed with future studies, could be used to diagnose a suspected mitochondrial disorder.”