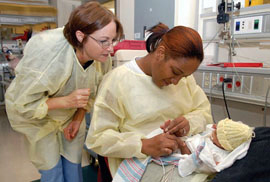 An intervention to teach mothers of preterm infants how to interact with their babies more effectively results in better weight gain and growth for the infants, according to a study funded in part by the National Institutes of Health.

A subsequent study showed that infants who had the benefit of a major component of this intervention more rapidly developed the muscle control needed for feeding successfully from a bottle. The initial findings were published on line in the Journal of Perinatology and the subsequent study in Advances in Neonatal Care.

Briefly, the intervention involved teaching mothers to recognize and respond to the subtle cues their preterm infants were hungry—far less pronounced than term infants.  Mothers were also taught how to provide appropriate social and physical stimulation—such as soothing talk, and gentle massages—to spur their infants' neurological development.

Infants born preterm often are not developed enough to feed on their own. Typically, the muscle control needed for infants to feed unassisted does not completely develop until the 34th week of pregnancy. Infants born before this time usually are fed through a nasogastric tube—a line passed through the nose and down the throat into the stomach. The study authors developed the intervention to help mothers stimulate their infant's alertness before feeding so that the infants would be better able to feed by mouth. The intervention also sought to spur the infants' social behaviors, such as keeping alert and looking at the mother, and neurological development, in hopes of offsetting at least some of the developmental delays often seen in preterm infants.

"Preterm infants who fail to gain sufficient weight are at a higher risk for delays and even impairments in cognitive ability and motor skills," said Valerie Maholmes, Ph.D., chief of the Pediatric Trauma and Critical Illness Branch at the NIH's Eunice Kennedy Shriver National Institute of Child Health and Human Development, which funded the research.  "We are hopeful that this intervention will prove to be an important tool in safeguarding the long-term health of an extremely vulnerable group of infants."

Additional funding for the research was provided by the National Institute of Nursing Research, also at NIH.

During their first year, infants born preterm are at high risk for life-threatening infections, blindness, breathing problems, feeding problems, learning and developmental disabilities, and cerebral palsy. According to the U.S. Centers for Disease Control and Prevention, nearly 500,000 U.S. infants were born preterm in 2013, the most recent year for which statistics are available.  Roughly 11 percent of births to Hispanics were preterm. The study authors write that it is common for preterm infants to grow more slowly than normal. Infants who grow at an appropriate rate have the best chances for avoiding problems in their neurological development.

"Preterm infants face increased health risks, just due to their having come into the world too early," Dr. White-Traut said.  "So further complications, such as poor feeding and delayed growth, can worsen the problems they already face."

Listen to a short audio file of Dr. White-Traut describing the study.

The intervention, dubbed H-HOPE, stands for Hospital to Home Transition – Optimizing Premature Infant's Environment. H-HOPE instructs mothers on how to provide behavioral, social, and physical stimulation designed to engage the baby's attention and spur brain development.  Compared to a term infant, preterm infants spend much more time sleeping and much less time awake and aware of what's going on around them. They're also are less able to communicate their needs than is a term infant.  For this reason, the researchers devised the H-HOPE intervention to show new mothers how to provide appropriate stimulation for their new borns, and how to pick up on their often times cues indicating that the baby is hungry.

The ATVV consists of a 15 minute intervention, undertaken twice daily, just before feeding.  A nurse and community health worker team teaches the mother the steps involved.  The mother is first taught to begin speaking to the infant in calm, soothing tones, before touching the infant.  The sound of a female voice is intended to gently alert the infant that the caregiver is present.  For the next ten minutes, the mother places the infant on his or her back, and gently massages the infant's head, chest, abdomen and arms, and then turns the infant over to massage the head and back.  For the final five minutes, the infant is swaddled, held in the mother's arms, and rocked horizontally.  Throughout the procedure, the mother is taught to make eye contact with the baby when the baby is awake. This sequence is repeated twice a day, from the time the baby reaches 31 weeks and continues after the baby is discharged from the hospital until 1 month after the approximate date the baby would have been born, had the pregnancy reached term.

The other part of the intervention teaches the mother how to recognize, interpret, and respond to her preterm infant's subtle behavioral cues.  For example, a term infant will cry loudly when he is hungry, and perhaps put his hand in his mouth.  In contrast, a preterm infant may not cry, may only weakly pull his hand toward his mouth to signal that he is hungry.

The researchers enrolled 183 mothers and their preterm infants, born from the 29th through the 34th week of pregnancy.  Half of the mothers were Hispanic. Roughly half of the mother-infant pairs were assigned at random to the H-HOPE intervention, and roughly half to another program that provided instruction on how to care for preterm infants. The study took place at two hospitals serving impoverished neighborhoods

"When we planned our research, we thought that preterm infants from impoverished backgrounds likely would benefit the most from this intervention," Dr. White Traut said.  "Poverty is linked to poorer long-term health and infant development. And as with other negative health influences, preterm infants usually are affected more strongly than term infants."

After the infants had completed the study, those who received the H-HOPE intervention weighed more, on average, than those who did not receive it. Infants in the H-HOPE group also grew more rapidly in length, especially during the last five days of their hospital stay.

The study, published in Advances in Neonatal Care, found that the feeding abilities of the pre-term infants improved immediately after they received the ATVV intervention. Pre-term infants were fed with a modified bottle connected to a sensor that measured their mouth movements.  Infants alternate periods of active sucking (bursts) with rest periods where they hold a nipple in their mouths but refrain from actively feeding. Among the specialized metrics the researchers cataloged were the total number of times the infant sucked on the nipple during a feeding, as well as the number of sucks "per burst." All infants were tested with the bottle and sensor just after they began oral feeding and each week while they remained in the hospital.

By all of the measurements the researchers recorded, the infants in the ATVV group outpaced the control group in the ability to perform the mouth movements needed to feed on their own.

About NINR: NINR supports basic and clinical research that develops the knowledge to build the scientific foundation for clinical practice, prevent disease and disability, manage and eliminate symptoms caused by illness, and enhance end-of-life and palliative care. For more information about NINR, visit the website at http://www.ninr.nih.gov.