For most children with HIV and low immune cell count, cells rebound after treatment 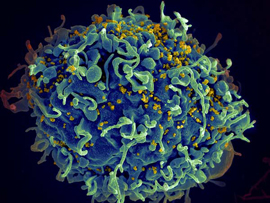 Most children with HIV who have low levels of a key immune cell eventually recover levels of this cell after beginning treatment, according to a study by researchers funded by the National Institutes of Health.

Failure of CD4+ T cells, a major target of HIV, to rebound after the virus has been suppressed with medication occurs in about 15 percent of adult patients and is associated with serious, life-threatening illnesses. The researchers conducted the current study to find out to what extent children who were infected with HIV around the time of birth might be at risk for this condition and whether this failure carried with it a major risk for serious infection.

“The good news is that this condition occurs only infrequently in young children with HIV,” said study author Rohan Hazra, chief of the Maternal and Pediatric Infectious Disease Branch at NIH’s Eunice Kennedy Shriver National Institute of Child Health and Human Development, which provided much of the funding for the study. “The comparatively few children whose CD4+ cells failed to rebound did not appear to be at any greater risk for serious infection than children with higher CD4+ counts.”

He added that the findings do not appear to change treatment recommendations for children with HIV, which include antiretroviral drugs to suppress the virus and periodic follow-up examinations to detect the first signs of any serious infections.

The findings were published online in AIDS, and the study was conducted by a team of researchers at several institutions in the United States and Brazil. The study’s first author was Paul Krogstad of the David Geffen School of Medicine at the University of California, Los Angeles.

To conduct their analysis, the researchers reviewed data from three research networks caring for more than 3,700 children in the U.S., Central and South America, and the Caribbean who were infected with HIV before or during birth. The researchers followed the CD4+ cell counts of 933 children who were at least 5 years old when they started anti-HIV treatment. Healthy CD4+ cell counts range from 500-1,200 cells per blood sample. Fewer than 500 cells per sample is considered low, and 200 or fewer per sample is considered very low. After one year of anti-HIV treatment, 86 percent of children in the study achieved CD4+ counts of 500 or more. After two years of anti-HIV treatment, 92 percent surpassed this threshold.

The researchers also reviewed the children’s records for signs of serious illness during the course of their treatment. Known as CDC Category C events, these illnesses are a sign of the seriously weakened immune system seen in people with AIDS. A total of nine children experienced such events. The occurrence of these events did not differ statistically between those having CD4+ cell counts below 500 at the time of the event (four children) and those with counts above 500 (five children).

The study authors noted that compared to adults with low CD4+ counts at the beginning of treatment, CD4+ counts in children increase to 500 or more with time after treatment has begun.  Yet, despite such increases, some children had Category C conditions or other significant illnesses during the first three years of HIV treatment. The researchers called for additional studies to understand this higher risk of illness.