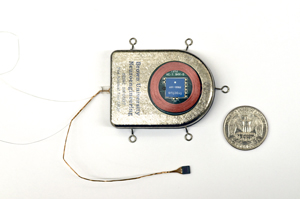 Wireless, implantable brain sensor, shown next to a U.S. quarter for size comparison.

A compact, self-contained sensor recorded and transmitted brain activity data wirelessly for more than a year in early stage animal tests, according to a study funded by the National Institutes of Health. In addition to allowing for more natural studies of brain activity in moving subjects, this implantable device represents a potential major step toward cord-free control of advanced prosthetics that move with the power of thought. The report is in the April 2013 issue of the Journal of Neural Engineering.

“For people who have sustained paralysis or limb amputation, rehabilitation can be slow and frustrating because they have to learn a new way of doing things that the rest of us do without actively thinking about it,’’ said Grace Peng, Ph.D., who oversees the Rehabilitation Engineering Program of the National Institute of Biomedical Imaging and Bioengineering (NIBIB), part of NIH. “Brain-computer interfaces harness existing brain circuitry, which may offer a more intuitive rehab experience, and ultimately, a better quality of life for people who have already faced serious challenges.”

Recent advances in brain-computer interfaces (BCI) have shown that it is possible for a person to control a robotic arm through implanted brain sensors linked to powerful external computers. However, such devices have relied on wired connections, which pose infection risks and restrict movement, or were wireless but had very limited computing power.

Building on this line of research, David Borton, Ph.D., and Ming Yin, Ph.D., of Brown University, Providence, R.I., and colleagues surmounted several major barriers in developing their sensor. To be fully implantable within the brain, the device needed to be very small and completely sealed off to protect the delicate machinery inside the device and the even more delicate tissue surrounding it. At the same time, it had to be powerful enough to convert the brain’s subtle electrical activity into digital signals that could be used by a computer, and then boost those signals to a level that could be detected by a wireless receiver located some distance outside the body. Like all cordless machines, the device had to be rechargeable, but in the case of an implanted brain sensor, recharging must also be done wirelessly.

The researchers consulted with brain surgeons on the shape and size of the sensor, which they built out of titanium, commonly used in joint replacements and other medical implants. They also fitted the device with a window made of sapphire, which electromagnetic signals pass through more easily than other materials, to assist with wireless transmission and inductive charging, a method of recharging also used in electronic toothbrushes. Inside, the device was densely packed with the electronics specifically designed to function on low power to reduce the amount of heat generated by the device and to extend the time it could work on battery power.

Testing the device in animal models—two pigs and two rhesus macaques—the researchers were able to receive and record data from the implanted sensors in real time over a broadband wireless connection. The sensors could transmit signals more than three feet and have continued to perform for over a year with little degradation in quality or performance.

The ability to remotely record brain activity data as an animal interacts naturally with its environment may help inform studies on muscle control and the movement-related brain circuits, the researchers say. While testing of the current devices continues, the researchers plan to refine the sensor for better heat management and data transmission, with use in human medical care as the goal.

“Clinical applications may include thought-controlled prostheses for severely neurologically impaired patients, wireless access to motorized wheelchairs or other assistive technologies, and diagnostic monitoring such as in epilepsy, where patients currently are tethered to the bedside during assessment,” said Borton.

Co-authors on this study include Juan Aceros, Ph.D., and Arto Nurmikko, Ph.D., also of Brown University.

In addition to a Bioengineering Research Partnership grant from the NIBIB and the Eunice Kennedy Shriver National Institute of Child Health and Human Development (R01EB007401), the researchers also received funding from the National Science Foundation, and the Defense Advanced Research Projects Agency.

About the National Institute of Biomedical Imaging and Bioengineering: NIBIB’s mission is to support multidisciplinary research and research training at the crossroads of engineering and the biological and physical sciences. NIBIB supports emerging technology research and development within its internal laboratories and through grants, collaborations, and training. More information is available at the NIBIB website: http://www.nibib.nih.gov.