Dr. Robert E. Cooke, a member of the Presidential Task Force that laid the groundwork for the founding of the NICHD, died at his home on Martha’s Vineyard on February 2. He was 93 years old. 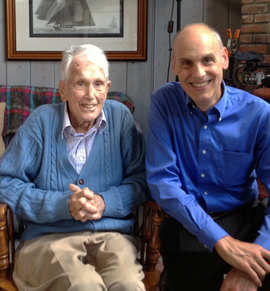 Dr. Cooke and Mrs. Shriver, the sister of President John F. Kennedy, are considered by many to be the driving forces behind the establishment of the Institute. Dr. Cooke served on a Presidential committee, the recommendations of which led to the founding of Head Start, the pre-school education program established under President Lyndon Johnson to serve the early educational needs of children from low-income families.

“Dr. Cooke cared deeply about the health and well being of children—those least able to make their needs known to our country’s leadership,” said Dr. Alan E. Guttmacher, Director of the NICHD.  “The NICHD came into existence largely due to his foresight and determination and, to this day, serves as a tribute to his efforts.   He will be greatly missed.”

Two of Dr. Cooke’s children were born with a genetic disorder, cri du chat syndrome, which is characterized by intellectual disability and delayed development. In the late 1950s, when Dr. Cooke was a professor and director of the department of pediatrics at Johns Hopkins Hospital, he began advising Mrs. Shriver, who headed the Joseph P. Kennedy Jr. Foundation. The foundation is dedicated to working on issues related to intellectual and developmental disabilities.

In a videotaped interview

for the NICHD’s 50th anniversary in 2012, Dr. Cooke recounted his early involvement in the institute’s founding.

“I was a good friend with Eunice Shriver and when the president was elected, before he took office, they put together a task force to look at health and social services for the new administration. And I got a telephone call one day asking me if I could serve on this task force.”

The task force’s report pointed out the lack of research on the physical, intellectual, and emotional growth of children and recommended the establishment of an organization to investigate disorders of human development, including intellectual and developmental disorders.

Following the report, and at the urging of Dr. Cooke, Mrs. Shriver and others, President Kennedy signed legislation creating the NICHD in 1962.

After the NICHD’s founding, Dr. Cooke continued his involvement with the institute over the years. He served as a member of the NICHD’s advisory body, the National Advisory Child Health and Human Development Council, the NICHD Intramural program’s Board of Scientific Councilors and the Advisory Board for the NICHD’s National Center for Medical Rehabilitation Research.

In his 2012 video interview, Dr. Cooke added that the NICHD has proven its value over its 50 year history:

“My feeling is that NICHD has made an enormous contribution to children in this country and, I think, to medicine in general,” Dr. Cooke said. “What you do for the child seems to make an enormous difference in his life.”

About the Eunice Kennedy Shriver National Institute of Child Health and Human Development (NICHD): The NICHD sponsors research on development, before and after birth; maternal, child, and family health; reproductive biology and population issues; and medical rehabilitation. For more information, visit the Institute's Web site at http://www.nichd.nih.gov/.