NIH announces $41.5 million in funding for the Human Placenta Project 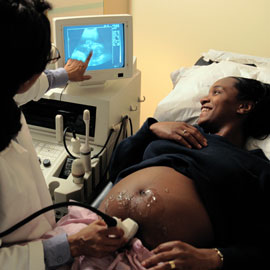 “The placenta is a lifeline that gives us our start in the world,” said Alan E. Guttmacher, M.D., director of NIH’s Eunice Kennedy Shriver National Institute of Child Health and Human Development, which is leading the research effort. “It influences the health of mother and child not just during pregnancy, but for the rest of their lives. However, despite its important role, the placenta has received comparatively little attention.”

The placenta is a temporary organ that ferries oxygen and nutrients from the mother to her fetus while at the same time removing potentially toxic substances like carbon dioxide. It also produces hormones to help maintain pregnancy and perform the unique immunologic function of allowing the mother and fetus to coexist.

Problems with the placenta may lead to negative pregnancy outcomes for mother or fetus, such as preeclampsia (a disorder of high blood pressure in pregnancy), gestational diabetes, preterm birth, and stillbirth. Placental problems have also been linked to a higher risk of heart disease later in life, for both mother and child.

“If we can develop technologies to monitor placental health during pregnancy, we should be able to prevent some of these problems from happening,” said Dr. Guttmacher. “We hope this funding opportunity will attract a broad range of researchers and clinicians to help—placental biologists, obstetricians, and experts in imaging, bioengineering, and other arenas.”

Until now, most studies of the placenta have been limited to ultrasound exams, blood tests, and the examination of placental tissue after delivery. These studies have provided important foundational knowledge, Guttmacher said, but many questions remain about normal placental development and function and the organ’s role in health and disease.

The initiative seeks to spur new technologies or innovative applications of existing technologies, such as imaging tools or sensors, that would allow practitioners to safely track placental functioning during pregnancy. Such technologies might gauge how blood and oxygen flow through the placenta, how it attaches to the uterine wall, and how it conveys nutrients to the fetus.

“Advances in imaging and bioengineering hold terrific promise for the study of the placenta,” said Roderic Pettigrew, Ph.D., M.D., director of NIH’s National Institute of Biomedical Imaging and Bioengineering, which is co-sponsoring the Human Placenta Project’s latest initiative. “We expect that the technologies resulting from this initiative will also translate to other organs and open new avenues of study that will benefit human health.”

The latest funding announcement for the Human Placenta Project, its third and largest to date, also requires applicants to address the effects of environmental factors—such as air pollution, medications, and maternal diet—on the placenta during pregnancy.

“The placenta is a fascinating organ, but it’s one of the least understood,” said Dr. Guttmacher. “For researchers who want to apply their skills in an area of medicine that isn’t being looked at as much as both scientific opportunity and human health warrant, this is a wonderful chance.”

About the Eunice Kennedy Shriver National Institute of Child Health and Human Development (NICHD): NICHD sponsors research on development, before and after birth; maternal, child, and family health; reproductive biology and population issues; and medical rehabilitation. For more information, visit the Institute’s website at http://www.nichd.nih.gov/.

About the National Institute of Biomedical Imaging and Bioengineering (NIBIB): NIBIB supports emerging technology research and development within its internal laboratories and through grants, collaborations, and training. More information is available at the NIBIB website: http://www.nibib.nih.gov.