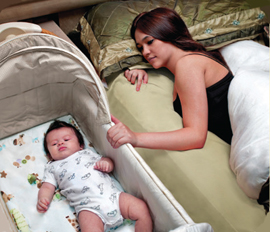 Following advice to sleep in the same room with their infants —but not in the same bed—does not appear to discourage new mothers from breastfeeding, as some experts had feared, according to a new study funded by the National Institutes of Health.

The study was published online in Academic Pediatrics and conducted by researchers at Boston University, the University of Virginia and Yale University.

Infants who sleep in a bed with their mothers or another individual at are higher risk for Sudden Infant Death Syndrome (SIDS) and other kinds of sleep-related infant death. The NIH’s Safe to Sleep® campaign advises that babies sleep near, but separately from, parents or caregivers—in the same room, but in their own safety-approved crib, bassinet or play yard. However, many infant care and public health experts have feared that avoiding bed sharing might interfere with breastfeeding, recommended because it also protects against SIDS and provides other health benefits.

The researchers conducted a nationally representative survey of more than 3,000 mothers and found that the majority (65.5 percent) reported room sharing without bed sharing, while 20.7 percent reported bed sharing. Thirty percent of women reported exclusively breastfeeding.  Among these women, 58.2 percent room-shared and did not bed-share.

The authors also found that mothers were more likely to follow the recommendations for room sharing and exclusive breastfeeding if they had received advice to do so. The women were asked if they received advice from any of these sources: family, baby’s doctors, nurses at the hospital where the baby was born, and the media.  The greater the number of sources a mother had heard from, the more likely she was to follow the recommendations.