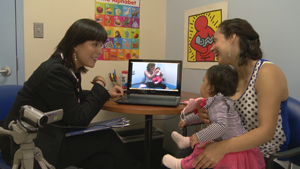 What
A program that helps lower-income parents interact more effectively with their infants and toddlers through reading and play improves children’s attention and decreases rates of problem behaviors by age 3 years, according to a study funded in part by the National Institutes of Health.

Previous studies have shown that poverty may interfere with parents’ interactions with their children, in part as a result of high levels of stress and depression commonly found in low income households.   By teaching parents how to engage in positive interactions such as reading aloud and play with their children, the program improves children’s attention and behavior, setting the stage for later school success.

Called the Video Interaction Project or VIP, the program involves video-recording parents reading aloud and playing with their children during each routine checkup at a pediatrician’s office.  A specialist in child development then reviews the video with the parent, highlighting positive interactions.  After the session, parents are given a book or a toy, along with a copy of the video, to take home.

The study was published in Pediatrics.

Who:
James Griffin, Ph.D., of the Child Development Branch at NIH’s Eunice Kennedy Shriver National Institute of Child Health and Human Development, which provided funding for the study.

“This study shows that a low cost intervention to help parents with infants and toddlers has the potential to reduce poverty-related disparities in school readiness that stand in the way of academic achievement,” Dr. Griffin said.

Background:
For the study, 675 parents and their newborn babies were assigned at random to one of three groups:

Only mothers participated in the study.  All were age 18 or older, most were Hispanic/Latino and born outside the United States and were from low income households.

VIP participants had better attention and play skills as toddlers and reduced hyperactivity and aggression at 3 years. Furthermore, hyperactivity was reduced by more than half for the highest risk families– those who had experienced violence, homelessness, significant financial hardship or mental illness.

Dr. Mendelsohn said that reducing aggression and hyperactivity in this age group is extremely important, as the ability to behave in school is crucial for children’s learning and educational achievement.

The study also showed increased play skills for the BB group during the toddler period. The researchers estimated that the VIP program costs $150-200 per child per year.

Previous studies of the VIP program have shown that it leads to reductions in maternal depression, parenting stress, and use of physical punishment.