Researchers from the National Institutes of Health have entered into an agreement with biotechnology company Vtesse, Inc., of Gaithersburg, Maryland, to develop treatments for Niemann-Pick disease type C (NPC) and other lysosomal storage disorders.

Lysosomal storage diseases, also known as lipid storage diseases, comprise about 50 rare inherited disorders that usually affect children. Fatty materials accumulate in the cells and tissues of the body. These diseases can result in damage to the brain, peripheral nervous system, liver, and other organs and tissues; they are often fatal.

Researchers at the National Center for Advancing Translational Sciences (NCATS) and the Eunice Kennedy Shriver National Institute of Child Health and Human Development (NICHD), both parts of NIH, will conduct studies on NPC and other lysosomal storage disorders with funding provided by Vtesse.

“This is an excellent example of how launching a project to study the underlying biology of one disease can lead to advances that hold promise for an entire group of diseases — the NCATS goal of finding what is common among diseases and the translational science process,” said NCATS Director Christopher P. Austin, M.D. “I am grateful to all of the NPC patients, their families and patient support groups who have been equal partners in our efforts to find therapeutic solutions to these devastating disorders.”

Vtesse will support the ongoing phase I clinical trial for NPC at the NIH Clinical Center, led by NICHD researchers who have been evaluating the safety of the drug cyclodextrin. Vtesse also plans to collaborate with NICHD to launch a second clinical study of cyclodextrin for the treatment of NPC in the United States and Europe, anticipated to begin in 2015. The use of cyclodextrin for NPC has been granted orphan drug designation in the United States and Europe, providing development incentives for products that demonstrate promise for the diagnosis and treatment of rare diseases or conditions.

Patients with NPC typically develop impaired coordination and movement (ataxia) and other neurological problems as a result of cholesterol buildup in their brain cells.

“Patients and their families are desperate for an effective treatment for NPC,” said NICHD Clinical Director Forbes D. Porter, M.D., Ph.D., who leads the phase I trial evaluating cyclodextrin at NIH. “Our role is to test promising new drugs and therapies to ensure that they are safe and effective.”

Researchers in NCATS’ Therapeutics for Rare and Neglected Diseases (TRND) program developed cyclodextrin as part of a project focused on finding treatments for NPC. The goal of TRND projects is to develop therapeutic candidates through a strategy known as de-risking, which involves the pre-clinical development of therapeutics to the stage where they attract biotechnology and pharmaceutical companies such as Vtesse to invest in their further clinical development.

The NPC project is a collaboration among government, academic and industry researchers, who worked with patient groups and the NPC community to advance knowledge about the disease. Before the TRND project, researchers had found that cyclodextrin showed promise as a treatment for NPC in studies of animal models for the disease. Additional NCATS efforts provided further evidence that cyclodextrin demonstrated potential as a treatment for NPC.

Through this agreement, Vtesse will also fund pre-clinical studies led by NCATS researchers to develop various types of the compound delta-tocopherol, a form of vitamin E, to target lysosomal storage disorders. The NCATS team will optimize the delta-tocopherol compounds for further testing as potential single treatments or as a combination therapy with cyclodextrin. Vtesse has exclusively licensed several NCATS patent applications specifically for their use in the treatment of lysosomal storage disorders. 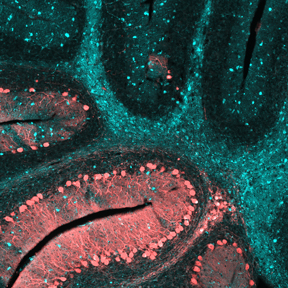 This image shows the cerebellum of a mouse brain affected by NPC at the end stage of the disease. The blue staining shows the dense pockets of lipid accumulations throughout the brain.

“The team at Vtesse offers sincere thanks to NIH for the research done to date preparing a strong pre-clinical package and studying use of cyclodextrin in patients with NPC, which is the basis for optimism as we prepare for the next phase of clinical development,” said Ben Machielse, Drs., president and chief executive officer of Vtesse. “Moving forward with this public-private partnership will provide a great opportunity for additional studies to address this rare disease. This research agreement is the culmination of significant cooperation with NIH. Going forward, we will seek input from several stakeholder groups — the patients and their caregivers, the advocacy community, academic researchers, NIH and regulatory agencies — to further develop the drug. We look forward to advancing what we believe will be a successful new treatment option.”

Rather than focusing on specific diseases and attempting to address them one at a time, NCATS researchers look for commonalities among multiple diseases. In the case of lysosomal storage disorders, NCATS researchers found in studies using patient skin cells as disease models that cyclodextrin and delta-tocopherol, each given alone or combined, showed promise for NPC and other lysosomal storage disorders, including Batten, Farber, Fabry, Tay-Sachs and Niemann-Pick type A diseases and mucopolysaccharidosis type 1. Cyclodextrin and delta-tocopherol reduced the accumulation of lipids and other macromolecules though lysosome exocytosis, a process by which materials are transported out of a cell. The results suggest that lysosome exocytosis may represent a potential therapeutic target for reduction of lysosomal storage in this class of diseases.

A number of other groups have made significant contributions to this and other NPC research and patient support over the years, including the Ara Parseghian Medical Research Foundation, Tucson, Arizona; the International Niemann-Pick Disease Alliance; the National Niemann-Pick Disease Foundation, Fort Atkinson, Wisconsin; and Support of Accelerated Research for Niemann-Pick Type C, Long Beach, California. The Ara Parseghian Medical Research Foundation and Dana’s Angels Research Trust, Greenwich, Connecticut, provide support for the NICHD natural history trial conducted at the NIH Clinical Center. In addition, the NIH Office of Rare Diseases Research provided early support for the work through an NIH Bedside-to-Bench Award to Dr. Porter.

To read more about NCATS and its TRND program, visit www.ncats.nih.gov/trnd.

The National Center for Advancing Translational Sciences (NCATS) is a distinctly different entity in the research ecosystem. Rather than targeting a particular disease or fundamental science, NCATS focuses on what is common across diseases and the translational process. The Center emphasizes innovation and deliverables, relying on the power of data and new technologies to develop, demonstrate and disseminate improvements in translational science that bring about tangible improvements in human health. For more information, visit www.ncats.nih.gov.