Findings may lead to treatments for endometriosis, infertility, and cancer 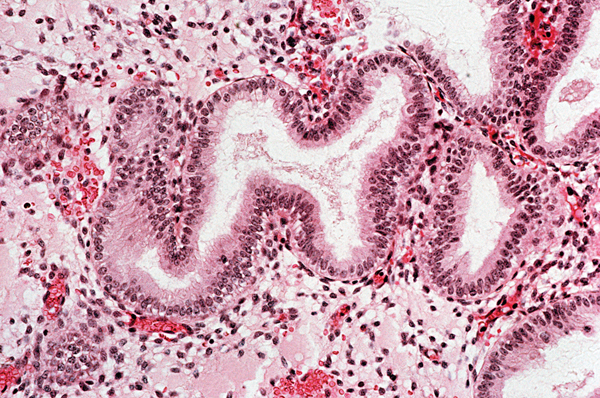 Researchers funded by the National Institutes of Health have produced human uterine endometrial cells from adult stem cells. The findings could lead to a way to produce new uterine cells from a patient’s own tissues, which could then be used to treat uterine disorders such as endometriosis, uterine factor infertility, and early-stage endometrial cancer.

The study was funded by NIH’s Eunice Kennedy Shriver National Institute of Child Health and Human Development. It appears in Stem Cell Reports.

Endometriosis is a disease in which tissue similar to endometrial cells lining the uterus grow in other parts of the body, such as on or under the ovaries, on the fallopian tubes, and on the tissues that hold the uterus in place. Symptoms include abdominal pain, including painful menstrual cramps, and infertility. There is no cure for the disease, but it can be treated with pain medications, hormone therapy, and surgery. According to the study authors, endometrial cells in patients with endometriosis have a reduced response to the hormone progesterone, which may play a role in the development of the disease. The authors theorize that restoring the ability to respond to progesterone may alleviate symptoms of the condition.

Induced pluripotent stem cells (iPSCs) are adult stem cells that have been genetically reprogrammed to a state resembling embryonic stem cells. Like cells from the embryo, iPSCs can be programmed to develop into many different types of adult cells. Before the current study, however, they had not been induced to form uterine endometrial cells.

Researchers led by Kaoru Miyazaki, M.D., Ph.D., of the Feinberg School of Medicine at Northwestern University in Chicago worked with iPSCs derived from the bone marrow of healthy female donors. They treated the cells with various cellular molecules and hormonal molecules, eventually producing cells resembling those of the endometrial stroma. The cells also had the ability to respond to the hormone progesterone and undergo changes needed to prepare for implantation of an embryo.

Pending further studies, the researchers believe that it may be possible to transform a patient’s own iPSCs into endometrial stromal cells that could replace her endometrial lining. Because these replacement cells would respond to progesterone, they might improve symptoms experienced by patients with endometriosis. In endometriosis patients with infertility, the regenerated endometrial cells might also be more receptive to implantation by an embryo, improving chances of pregnancy. Alternatively, iPSCs could be used to generate replacement cells for women with a damaged endometrium because of abnormal uterine development or to treat after some cases of endometrial cancer.