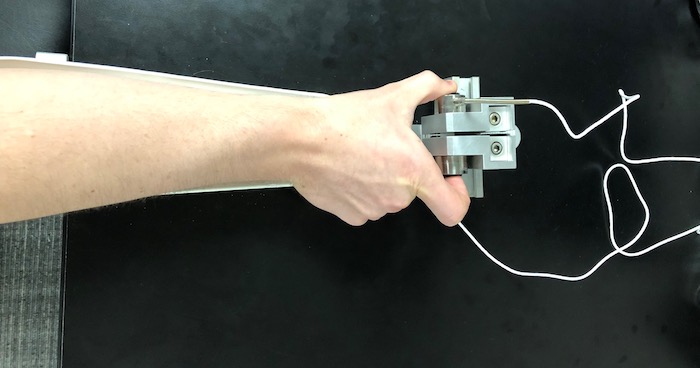 Many carriers of the FMR1 premutation—a mutation in the gene associated with the developmental disorder Fragile X syndrome—may have subtle changes in grip strength, fine motor control, and reaction time before other symptoms develop, according to a small study supported in part by the Eunice Kennedy Shriver National Institute of Child Health and Human Development

The study authors suggest that detecting these changes may provide a means for early diagnosis of Fragile X Associated/Tremor and Ataxia Syndrome (FXTAS), a disorder of movement and thinking ability that sometimes occurs in FMR1 premutation carriers over age 50. Monitoring changes in fine motor control might also provide a way to track progression of the condition.

The study was conducted by Matthew W. Mosconi, Ph.D., of the University of Kansas, and colleagues. It appears in Frontiers in Integrative Neuroscience.

Fragile X syndrome is a genetic disorder associated with intellectual disabilities, autism, anxiety, and sensory issues. The condition results from a mutation in the FMR1 gene on the X chromosome. People with Fragile X syndrome have 200 or more duplications, or repeats, of a sequence of DNA bases in a specific region of the gene. In most people, the region has from 24 to 40 repeats, and they are passed on from parent to child in a stable manner. The FMR1 premutation consists of between 55 to 200 repeats, and the number of repeats can increase between generations. The premutation does not cause developmental disabilities, but does increase the risk for Fragile X-Associated Primary Ovarian Insufficiency, a form of early menopause, FXTAS.

To identify people at high risk for FXTAS who might benefit from early diagnosis and treatment, the researchers devised a method to test whether subtle differences in fine motor control might be present in premutation carriers. The researchers used a precision gripping test, where participants would squeeze a device between their thumb and forefinger, varying the pressure of their grip to control the movement of bars on a computer screen.

These findings suggest that subtle differences in fine motor control may appear before recognizable symptoms of FXTAS, providing a basis for testing to identify the earliest signs of the condition.

Larger studies are needed to determine if the neurological differences the researchers identified in the study correlate with the development of FXTAS.