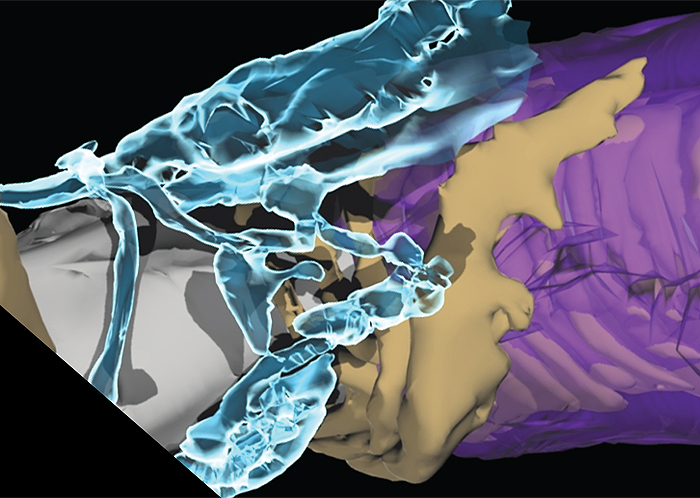 The transmission speed of neurons fluctuates in the brain to achieve an optimal flow of information required for day-to-day activities, according to a National Institutes of Health study. The results, appearing in PNAS, suggest that brain cells called astrocytes alter the transmission speed of neurons by changing the thickness of myelin, an insulation material, and the width of gaps in myelin called nodes of Ranvier, which amplify signals.

“Scientists used to think that myelin could not be thinned except when destroyed in demyelinating diseases, such as multiple sclerosis,” said R. Douglas Fields, Ph.D., senior author and chief of the Section on Nervous System Development and Plasticity at NIH’s Eunice Kennedy Shriver National Institute of Child Health and Human Development (NICHD). “Our study suggests that under normal conditions, the myelin sheath and structure of the nodes of Ranvier are dynamic, even in adults.”

The brain is composed of neurons, which have extensions called axons that can stretch for long distances. Axons are wrapped by layers of myelin, which serve as insulation to increase the speed of signals relayed by neurons. Gaps between segments of myelin are called nodes of Ranvier, and the number and width of these gaps can also regulate transmission speed.

“Myelin can be located far from the neuron’s synapse, where signals originate,” said NICHD’s Dipankar Dutta, Ph.D., the lead author of the study. “We wanted to understand how myelin, and the cells that regulate it, help synchronize signals that come from different areas of the brain.”

The researchers focused their attention on perinodal astrocytes, which frequently touch nodes of Ranvier throughout the brain. In experiments using mice and rats, the researchers found that these astrocytes regulate adhesion molecules that connect myelin to axons. When these molecules are cut by the enzyme thrombin, myelin detaches from the axon, layer by layer.

The researchers blocked the ability of perinodal astrocytes to regulate thrombin and observed thinner myelin sheaths and wider nodes of Ranvier. In turn, these changes reduced the signal speeds of neurons by approximately 15 percent, which was enough to impair reflexes of mice in a vision-based test.

The findings suggest that astrocytes, by regulating signal speeds, play an important role in how the brain processes information. Furthermore, the researchers propose that blocking thrombin may help stabilize myelin. Thrombin inhibitors are already approved by the U.S. Food and Drug Administration for other uses, and the study team is currently testing their idea in a mouse model of multiple sclerosis.

Funding for the work was provided by NICHD and other NIH components, including the Center for Information Technology, the National Institute of Neurological Disorders and Stroke, and the National Cancer Institute. Additional support was provided by the Department of Defense through the Henry M. Jackson Foundation for the Advancement of Military Medicine.

This press release describes a basic research finding. Basic research increases our understanding of human behavior and biology, which is foundational to advancing new and better ways to prevent, diagnose, and treat disease. Science is an unpredictable and incremental process—each research advance builds on past discoveries, often in unexpected ways. Most clinical advances would not be possible without the knowledge of fundamental basic research.