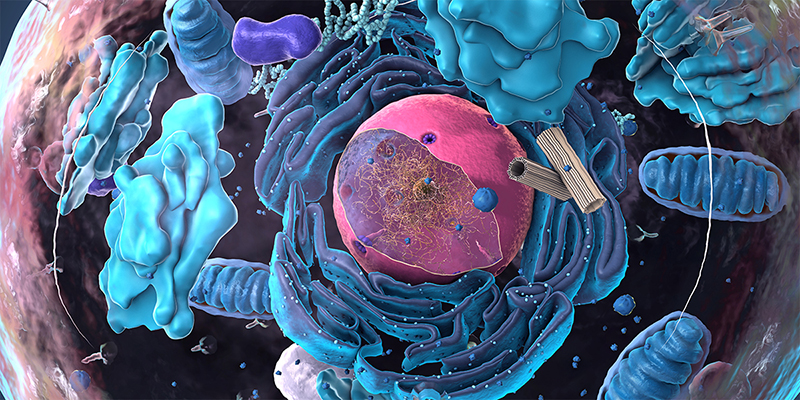 The architecture of the nuclear pore is shaped by the cellular environment, according to a new NIH-supported study that used advanced methods to capture large protein complexes in their natural configurations. Such knowledge offers insight into how these structures, such as nuclear pore complexes, look and function within a cell. 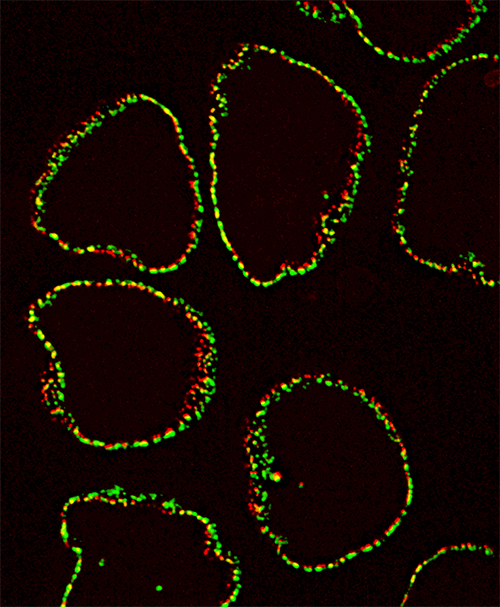 Eukaryotic organisms, such as animals and plants, have cells that contain a nucleus and other membrane-bound organelles. The cell’s genetic material, or DNA, is packed inside the nucleus. Proteins and molecules can only enter or exit the nucleus through regulated channels called nuclear pores. These pores are lined with proteins, which collectively make up the nuclear pore complex. These complexes are generally thought to have three rings (inner, cytoplasmic, and nucleoplasmic) that surround the central transport channel. Prior to this new study, researchers’ understanding of the structure of these nuclear pore complexes relied on older imaging methods that can introduce artifacts as samples are processed. As a result, structural models may not accurately represent 3-dimensional configurations of a complex.

To more accurately image nuclear pore complexes, the study team used a high resolution imaging technique called cryo-electron tomography, or cryo-ET. However, cryo-ET can only be used on samples that are very thinly sliced (less than 500 nanometers), which limits scientists’ ability to use this technique across different types of cells and structures. In the last few years, a new way to obtain samples was developed—cryo-focused-ion-beam milling—which is thin enough for cryo-ET and is considered an artifact-free preparation method.

Using these new techniques, the study team determined the structure of human nuclear pore complexes, and they found notable differences compared to earlier studies. The inner ring is substantially wider, providing approximately 75% more volume in the transport channel. The nuclear membrane surrounding the nuclear complex also appears to be asymmetric. When the researchers depleted key proteins in the complex (Nup96), the resulting changes indicate a modular design for the nuclear pore, with each ring interdependently regulating the central channel.

Overall, the findings highlight the flexibility of the nuclear pore complex and suggest that the cellular environment has a significant influence on the pore’s dimensions and architecture.

The findings are the first to report on the structure of the nuclear pore in its native state. However, the authors write that this structure is likely one of several nuclear pore states that are yet to be discovered.

These novel findings open new questions for researchers. For example, why does the inner ring appear malleable while the cytoplasmic and nucleoplasmic rings are more fixed in size? What creates the asymmetry observed at the nuclear membrane? More work is needed to understand these observations and what they mean for nuclear transport.