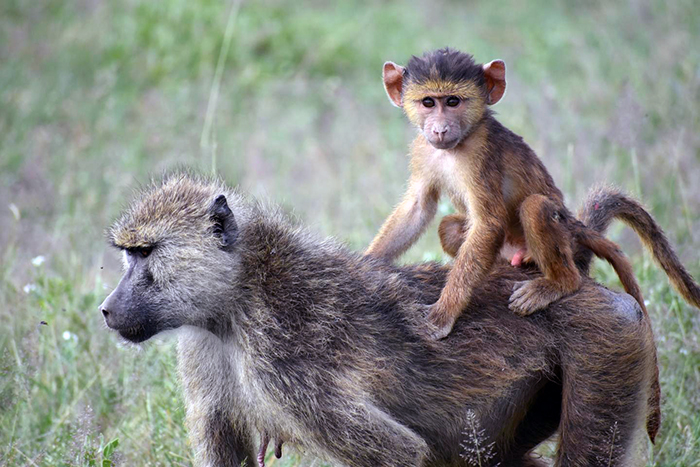 Early life adversity among female baboons is directly linked to lower survival rates for their offspring, suggests an analysis funded by the National Institutes of Health. The study includes 45 years of data from a wild baboon population and overcomes a limitation of analyses of human populations, which have had difficulty distinguishing environmental effects on parents from environmental effects on children.

Researchers found that, even when they did not experience adversity themselves, offspring of female baboons who experienced early life adversity were more likely to die early, compared to their peers. If the results can be confirmed in human studies, they may provide information on how to prevent poor health outcomes from persisting through generations.

The researchers were led by Matthew N. Zipple, a Ph.D. candidate at Duke University in Durham, North Carolina. Funding was provided by NIH’s Eunice Kennedy Shriver National Institute of Child Health and Human Development and National Institute on Aging, the National Science Foundation, and other institutions. The study appears in eLIFE.

Much less is known about whether early life adversity in parents affects their offspring’s health and longevity. Studies of smaller, short-lived animals, such as hamsters and finches, have linked early life adversity in parents to smaller body size in offspring and lower rates of offspring survival and reproduction. Little research has been conducted on longer lived animals, largely because of the prolonged period of time needed to complete such studies. Human studies of populations that have undergone food deprivation have produced mixed results, showing offspring effects under some conditions, but not others.

The analysis focused on two sources of a mother’s early life adversity: death of her own mother before she reached adulthood (4 years of age) and birth of a sibling by the time she reached 18 months of age.

The researchers cannot explain why early life adversity diminishes not only a mother’s lifespan but also that of her offspring. They theorize that early life adversity for a mother may compromise her health and mothering ability, resulting not only in an earlier death for her, but in a diminished capacity to care for her young. For example, primates orphaned may miss out on maternal instruction on how to find food and may never develop sufficient skill to provide for their offspring. Similarly, birth of a close-in-age sibling may result in less maternal care and instruction and a failure to develop the skills needed to care for their own offspring.

The results suggest that future studies of human parents might investigate how adverse early life experiences contribute to poor health outcomes in their children.