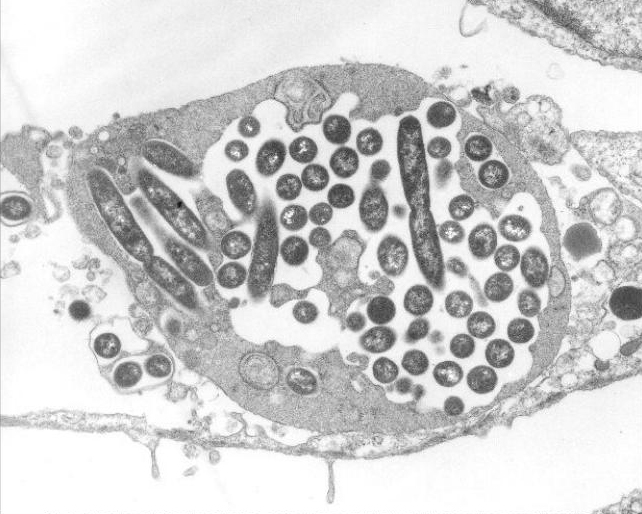 A protein essential for the survival of the bacterium that causes Legionnaires' disease works by stealing iron from the host cells it infects, according to a study by researchers from the National Institutes of Health and other institutions. In a series of experiments, the researchers determined the shape of the protein as it weaves through a membrane inside the cell and determined the portions of the protein involved in iron transport. Their findings may provide information useful for designing new drug treatments for Legionnaires’ disease.

The study was led by Eric T. Christenson, Ph.D., a postdoctoral fellow in the Unit on Structural and Chemical Biology at NIH’s Eunice Kennedy Shriver National Institute of Child Health and Human Development (NICHD). It appears in the Proceedings of the National Academy of Sciences.

Legionnaires’ disease is a serious form of pneumonia caused by the bacterium Legionella pneumophila. The disease was named for its discovery after an outbreak among attendees of an American Legion convention in 1976. Legionella bacteria are normally found in freshwater, but can become a health hazard when they spread in human-made systems such as showerheads, hot tubs, hot water tanks, and heaters. The disease spreads when water droplets containing the bacteria are inhaled into the lungs. Most healthy people exposed to the bacteria do not get sick. At risk, however, are people with weakened immune systems, current or former smokers, people age 50 or older, and people with lung disease.

Within the lungs, the Legionella bacterium infects immune cells known as macrophages. Ordinarily, these cells flow around microbes that enter the lungs, engulfing them in a membrane-bound bubble called the endosome, which holds them for later destruction by other parts of the cell.

However, Legionella bacteria sidestep this cellular defense mechanism. Once it’s inside the endosome (which is then referred to as the Legionella-containing vacuole), the bacterium funnels into its host cell a diverse group of more than 300 effectors—proteins that shield the bacterium from destruction by hijacking the cell’s resources. A few of these effectors also form channels through the membrane, diverting nutrients from the cell and into the vacuole. The bacterium subsequently reproduces until the overcrowded cell bursts, freeing the bacteria to infect more cells.

Earlier studies have shown that disabling most of the 300 effector proteins has little effect on the bacteria’s growth and reproduction. Researchers believe this is because the functioning of any particular protein is duplicated by other proteins in the group. However, Legionella bacteria engineered to lack functioning copies of the protein MavN fail to reproduce in laboratory cell cultures but can survive in iron-rich solutions. For these reasons, researchers have hypothesized that MavN supplies the Legionella bacterium with iron, obtained from the cells it infects.

The researchers conducted a series of experiments to determine the shape of the MavN protein and the regions of the protein that interact with iron.

The first experiment involved two strains of L. pneumophila, one having a functioning copy of MavN, the other lacking the MavN gene. The researchers inserted a gene-activating DNA segment (called a promoter) connected to a gene that makes a protein that gives off green light. The promoter doesn’t work in the presence of iron and only activates a gene in iron-poor environments. The researchers then infected macrophage cells with the altered bacterial strains. Only macrophages with bacteria lacking MavN gave off green light, indicating that the bacteria infecting these cells could not extract iron from the cell.

Next, the researchers mapped the protein’s configuration, determining its shape as it weaves in and out of the vacuole membrane like the stitches on a baseball cover. In this experiment, they determined the regions of the MavN protein that bind to iron. They then engineered versions of the protein and systematically altered each of the iron-binding regions in subsequent versions. They transplanted each altered version of the protein into strains of Legionella bacteria that lacked MavN. Each alteration in MavN coincided with variations in growth of the bacteria. Some of the MavN alterations strongly stunted growth, while bacteria with other alterations were starved and incapable of reproducing after infecting the cells.

Based on these findings, the researchers concluded that Legionella growth is tied to the quantity of iron the bacteria can pirate from host cells and that MavN is indispensable for this purpose.

Understanding the structure and iron-binding regions of MavN could inform new treatments for Legionnaires’ disease.

“MavN is essential for the Legionella bacterium’s survival,” said study author Anirban Banerjee, Ph.D., chief of NICHD’s Unit on Structural and Chemical Biology. “Designing a drug that could disrupt its function might provide an effective treatment for Legionnaires’ disease.”

The findings may also have implications for understanding nutrient acquisition by other infectious bacteria that hide in endosomes, such as Salmonella and Shigella.