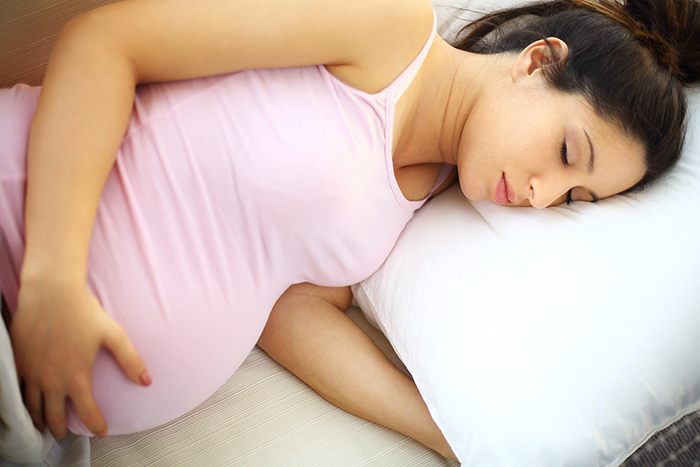 Sleeping on the back or side through the 30th week of pregnancy does not appear to increase the risk of stillbirth, reduced size at birth, or high blood pressure disorders of pregnancy, suggests an analysis funded by NIH’s Eunice Kennedy Shriver National Institute of Child Health and Human Development (NICHD).

The study was conducted by Robert M. Silver, M.D., of the University of Utah School of Medicine and colleagues. It appears in Obstetrics & Gynecology.

The findings may help to allay concerns—informed by previous studies—that sleeping on the back or right side may compress blood vessels supplying the uterus and potentially harm the fetus or the mother.

The researchers cautioned that their study evaluated sleep position only up to 30 weeks of pregnancy and does not provide information on whether back or right-side sleeping in late pregnancy could increase the risk of birth or pregnancy complications.

Many physicians advise pregnant women to sleep on their left side. Previous studies have linked back and right-side sleeping with a higher risk of stillbirth, reduced fetal growth, low birth weight, and preeclampsia, a life-threatening high blood pressure disorder that affects the mother. Researchers have hypothesized that, with these sleep positions, the increasing weight of the uterus during pregnancy could compress the aorta (the central artery conveying blood to the upper and lower abdomen) and the inferior vena cava (the central vein returning blood from the lower abdomen to the heart).

The authors of the current study note that many of these earlier studies included a small number of women. Moreover, most asked women about their sleeping positions after the stillbirth or other complication. This raises the possibility of recall bias—that women who had a complication may unintentionally overemphasize a sleep position because they thought it could be responsible for the complication.

More than 8,700 women responded to questionnaires on their sleep habits on two occasions: between the 6th and 13th week of pregnancy and again between the 22nd and 29th week of pregnancy. They were asked about their positions when they went to sleep and when they woke up: on the left side mostly, on the right side mostly, both sides equally, on the back mostly, on the front mostly, equally on the side, front and back, or sitting or propped up.

To counter the possibility that the women may not have accurately recalled their sleep positions, the researchers conducted a smaller analysis of women who slept with a device that recorded their sleep position. Among the more than 400 women in this group, those who slept on their back more than 50 percent of the time were no more likely to have an adverse outcome than those who slept on their back less than 50 percent of the time.

The researchers concluded that sleeping position during early and mid pregnancy does not appear to affect the risk of complications. They added that the findings may help to reassure pregnant women, particularly those who have difficulty sleeping on their left side and those who have trouble controlling their position while asleep.