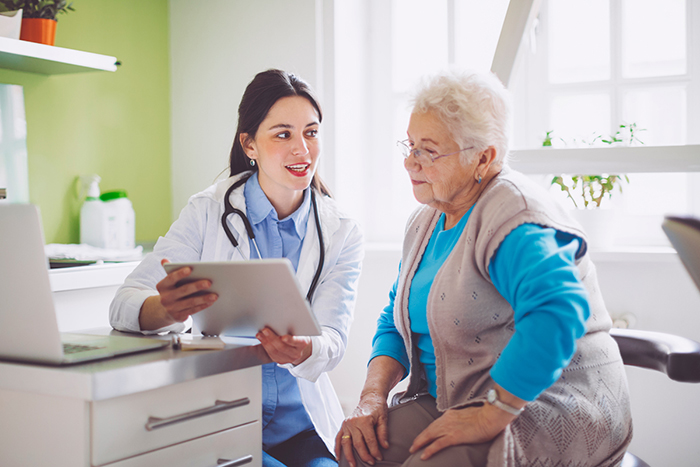 Two surgical procedures used to correct vaginal prolapse—one to remove the uterus and one that supports the uterus with mesh—have comparable three-year outcomes, according to a new study funded by the National Institutes of Health. To date, the randomized clinical trial provides the longest-term comparison of the procedures, and researchers will continue to follow the patients for a total of five years. The study appears in the Journal of the American Medical Association and was funded by NIH’s Eunice Kennedy Shriver National Institute of Child Health and Human Development (NICHD) and Office of Research on Women’s Health.

“These findings provide important information for women who have had these procedures and for the physicians entrusted with their care,” said Donna Mazloomdoost, M.D., one of the study authors and program director of the NICHD Pelvic Floor Disorders Network, which supported the work.

Vaginal prolapse is a pelvic floor disorder that occurs when support muscles weaken and pelvic organs press down on the vagina, sometimes forcing it to bulge or protrude from the vaginal opening. This condition is more likely to occur as a woman gets older.

Traditionally, surgeons treat vaginal prolapse by removing the uterus, thereby providing access to deep pelvic ligaments, such as the uterosacral ligaments. The top of the vagina can then be attached to those ligaments in a procedure known as uterosacral ligament suspension. Other procedures, such as mesh hysteropexy, do not require removal of the uterus and instead use mesh to suspend the uterus and pelvic organs so they no longer fall out of place. However, the U.S. Food and Drug Administration halted the sale and distribution of mesh kits for vaginal prolapse repair on April 16, 2019 for safety reasons, after the current study was completed.

The Study of Uterine Prolapse Procedures - Randomized Trial (SUPeR) is a randomized clinical trial that recruited 183 postmenopausal women at nine centers across the United States. Ninety-three women were randomized to mesh hysteropexy and 90 were randomized to hysterectomy with uterosacral ligament suspension.

The researchers compiled a failure rate for each procedure using a standard examination called the Pelvic Organ Prolapse Quantification System and whether women reported new symptoms of prolapse or needed retreatment for prolapse (i.e., another surgery or use of a supportive device called a pessary). The study team found that after three years, mesh hysteropexy had a 26% failure rate, while hysterectomy had a 38% failure rate. The difference in the two rates was not statistically significant, according to the authors.

“More long-term research is needed to determine if one procedure is better than the other,” said Charles W. Nager, the lead author of the study and chair of the Department of Obstetrics, Gynecology and Reproductive Sciences at UC San Diego Health. “After the five-year follow-up period, we’ll reanalyze the results.”

No differences were found in patient-reported outcomes on surgical pain, pelvic pain and body image. Similar proportions in each group reported “much better” or “very much better” improvements in their symptoms (90% of respondents for mesh hysteropexy, 89% for hysterectomy) when queried at three years. Both groups also reported improvements in sexual function and lower incidence of painful sex (dyspareunia).

The study team also found no significant differences in adverse events, such as urinary tract infections and incontinence, between the two groups. The mesh hysteropexy group had an 8% mesh exposure rate, meaning the mesh became visible through the vaginal wall. For some women, this causes no symptoms, but for others, it may cause pain, bleeding or other problems. None of the women in this study required surgery for their mesh-related complications. The study team also did not observe any significant problems with uterine tissue in the mesh group during the three years of follow-up. Surgery for mesh hysteropexy was shorter than hysterectomy by about 45 minutes (average of 111.5 minutes compared to 156.7 minutes).