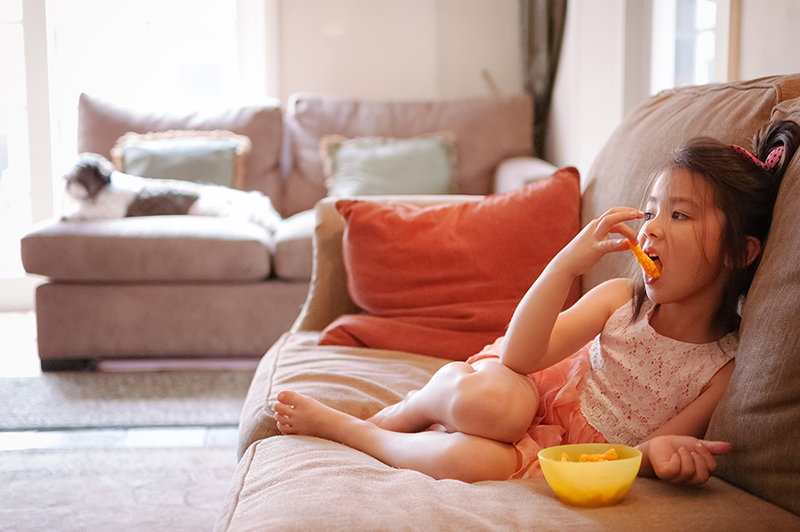 In response to the COVID-19 pandemic, American children may have adopted a range of behaviors that increase their risk for obesity, an NIH-funded study suggests. Compared to before the pandemic, children 7- to 12-years old increased their sedentary behavior, screen time, and food intake, while reducing their level of physical activity and adopting a later sleep schedule—all behaviors that increase obesity risk. These behaviors exceed changes traditionally seen during summer breaks.

The study was conducted by Bridget Armstrong, Ph.D., of the University of South Carolina, and colleagues. It appears in Pediatric Obesity. Funding was provided by NIH’s Eunice Kennedy Shriver National Institute of Child Health and Human Development, National Heart, Lung, and Blood Institute, and National Institute of General Medical Sciences.

Initial studies have suggested the switch to online learning during the pandemic may have led to similar changes. Researchers undertook the current study to verify if the frequency of such obesity-promoting behaviors increased during the COVID-19 pandemic, compared to the two previous years.

To conduct the study, the researchers provided smart watches to children at schools in the southeastern United States and collected data from them during spring and summer over 3 years. Parents responded to questionnaires on children’s screen time and dietary intake. Data was obtained from 182 children in 2018, 127 of these children in 2019, and 74 of them in 2020.

The researchers found that, before the pandemic, obesity promoting behaviors increased slightly from year to year as the children matured. From spring 2018 to spring 2019, sedentary time increased by 25 minutes per day, light physical activity (such as walking slowly) decreased by 17 minutes per day, and moderate to vigorous physical activity (equivalent to brisk walking or cycling) declined by 8 minutes. Total screen time increased by 8 minutes. There were no changes in sleep or diet from 2018 to 2019. For summer 2018 to summer 2019, children had similar trends in physical activity and screen time, but they slept an average 17 minutes less and went to bed 12 minutes later.

Unhealthy behaviors increased dramatically after the pandemic began. Compared to spring 2019, spring 2020 sedentary behavior increased by 79 minutes, screen time by 97 minutes, light physical activity decreased by 69 minutes, and moderate to vigorous physical activity by 8 minutes. Consumption of healthy foods increased by .3 and unhealthy foods by 1.2. Although children slept an additional 17 minutes per night, they went to bed later and slept later, with the halfway point between the time they went to bed and the time they got up shifting by 124 minutes.

The authors did not distinguish between screen time for remote learning and other screen use, but noted that the spring trend of increased screen time continued into summer.

“While the increase in springtime screen use is largely influenced by virtual learning, patterns established in the spring persisted into summer, even in the absence of virtual school,” the authors wrote. “While high levels of sedentary behavior and screen time along with reduced physical activity levels could be attributed to continued pandemic restrictions and potential relaxed parental rules to allow children to connect with friends virtually, they might reflect new entrenched behavior patterns that persist even in the absence of pandemic restrictions.”

The authors concluded that the changes in screen time, activity, and diet they observed after the beginning of the pandemic could increase children’s risk for obesity.