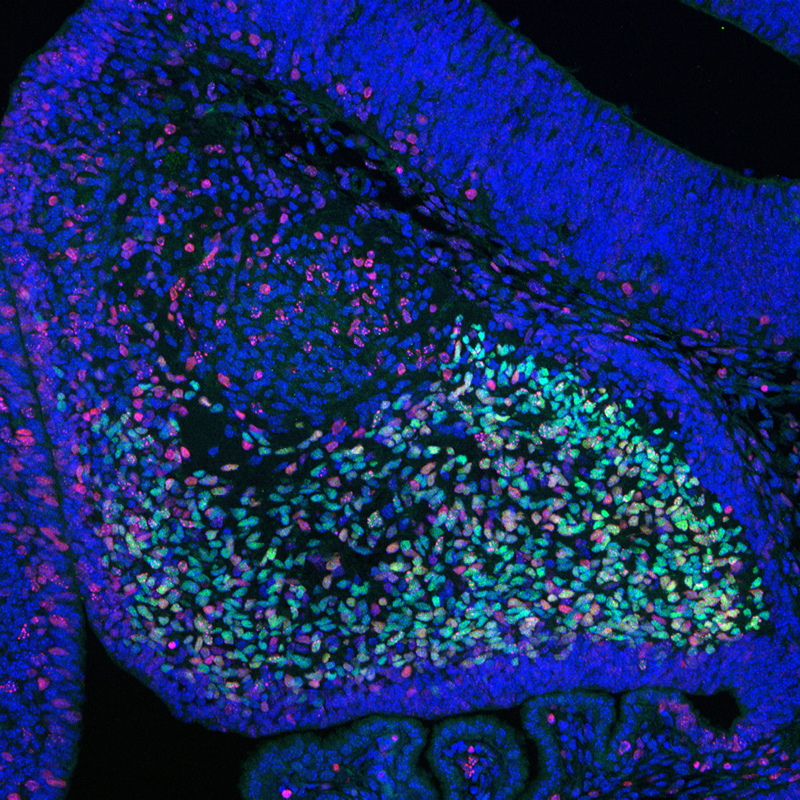 The cerebellum (a part of the brain) of a mouse embryo.
Credit: Vittorio Sartorelli, M.D., Laboratory of Muscle Stem Cells and Gene Regulation, National Institute of Arthritis and Musculoskeletal and Skin Diseases, NIH

Scientists funded in part by the National Institutes of Health have generated a mouse embryo model, or embryoid, that develops beyond neurulation—formation of the neural tube, which gives rise to the central nervous system—and closely mirrors natural mouse embryos 8.5 days after fertilization. These mouse embryoids offer a promising model system for research into factors affecting mammalian embryonic development and disease. The work is led by Magdalena Zernicka-Goetz, Ph.D., of the California Institute of Technology, Pasadena, and the University of Cambridge, U.K., and is partly supported by NIH’s Eunice Kennedy Shriver National Institute of Child Health and Human Development.

To assemble the mouse embryoids, the researchers combined mouse embryonic stem cells (ESCs) with two types of mouse extraembryonic stem cells that give rise to the yolk sac and placenta. This combination enabled development of all brain regions, in contrast to embryo models that are derived from ESCs alone and lack extraembryonic tissue. The resulting mouse embryoids also developed a neural tube flanked by somites—precursor cells that give rise to the vertebrae, skeletal muscle, cartilage and other structures. The mouse embryoids had a gut tube and precursor cells for formation of sperm. The whole structure developed within a yolk sac that formed blood islands, structures in which blood cells are formed to support the embryo and contribute to the circulatory system.