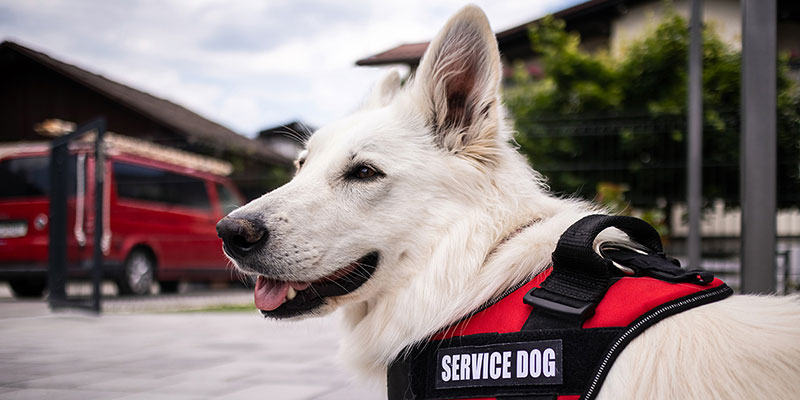 Among military members and veterans relying on service dogs for post-traumatic stress disorder (PTSD), those whose dogs were rated as less excitable scored lower on PTSD severity, according to a study funded by the National Institutes of Health. Those paired with less excitable service dogs also tended to have a closer relationship with the dog, compared to those with more excitable dogs.

The authors concluded that pairing service members with less excitable service dogs could potentially lessen their PTSD symptoms. They added that their findings set the stage for future research to test the role of other canine characteristics and interactions with their owners to improve the mental health of service members with PTSD.

The study was conducted by Marguerite E. O’Haire, Ph.D., at Purdue University, and colleagues. It appears in PLOS ONE. Funding was provided in part, by NIH’s Eunice Kennedy Shriver National Institute of Child Health and Human Development (NICHD) and National Center for Complementary and Integrative Health.

PTSD is a mental health condition that people can develop after experiencing or witnessing a traumatic or life-threatening event, such as military combat or an assault. Specially trained PTSD service dogs are often paired with an individual person. The dogs are trained to perform tasks intended to ease PTSD symptoms, such as nudging their owners to interrupt flashbacks or wake them from nightmares. Studies have found that veterans with a service dog report less severe symptoms than those without a service dog. However, it is not known what aspect of the service dog relationship may benefit people with PTSD. Some researchers have proposed that the companionship the animals provide alleviates stress, while others believe that the tasks the animals are trained to perform provide mental health benefits.

The study included 82 military members and veterans diagnosed with PTSD who were paired with a PTSD service dog. The study participants completed questionnaires on their personality characteristics, PTSD symptoms, mental health, perceived relationships with their dogs, use of dog training methods, and their perceptions of their dogs’ behaviors. Before the dogs were placed with the study participants, trainers responded to a questionnaire to rate the dogs’ temperaments. These included measures of how sensitive the animals were to being touched, whether they were strongly motivated by food, and how excitable they were when a stranger approached. This ranged from a calm, slow approach to the unfamiliar person for less excitable dogs to jumping or straining on the leash for more excitable dogs.

The researchers said that their study identified a baseline characteristic of canines—excitability—which predicts PTSD severity. Because PTSD symptoms include a high level of arousal and a heightened startle response, the study data suggest that a less excitable dog may be better suited to PTSD patients than a more excitable dog. The authors noted that the training program screened all potential dogs for excitability and excluded those rated as too excitable. However, service dogs rated higher in excitability may be better suited for selection as a service dog in a role where slightly elevated excitability is considered a more favorable trait, such as a hearing assistance dog.

The authors speculated that more excitable dogs may be more challenging for PTSD patients, and their owners may have greater difficulty in forming a bond with them. Lack of a strong bond may interfere with the benefits the owners derive from the service dog relationship. The authors called for future research on how PTSD service dog traits and relationships with their owners may influence their effectiveness in lessening PTSD symptoms.