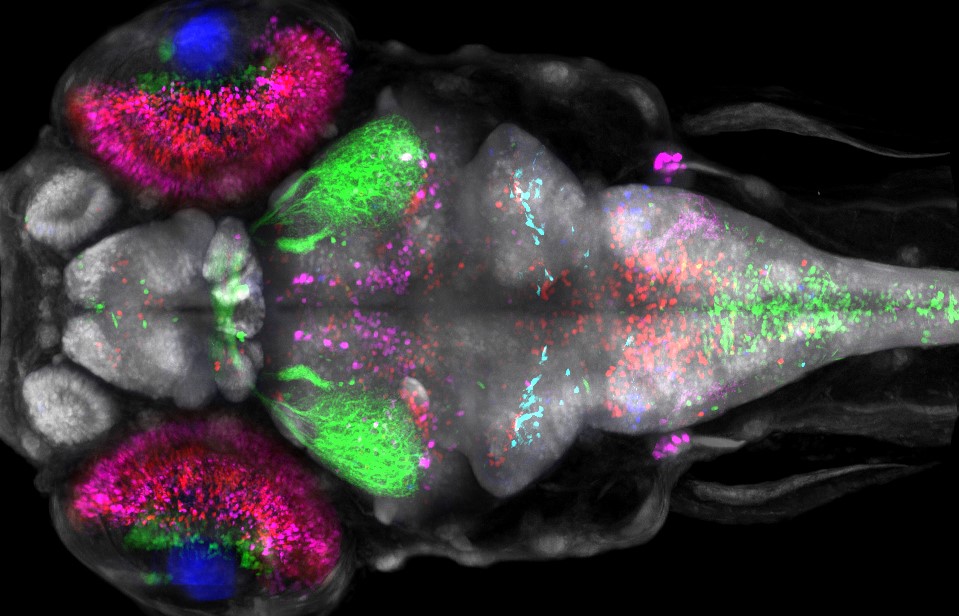 Microscopy image of zebrafish head with neurons in brain, eyes, and other structures marked with different fluorescent colors.
Credit: NICHD/NIH

Two small clusters of neurons dampen signals that otherwise cause zebrafish to startle and dart away, according to an NIH study. The findings help explain how the brain filters the constant stream of information that comes from the environment. The study, which appears in the August 2, 2018, issue of Current Biology, may also improve understanding of neurological disorders like schizophrenia, Tourette syndrome, and obsessive-compulsive disorder.

The brain filters the constant stream of information that stimulates our senses, separating what's important from what's not. Problems with this filtering process lead to information overload, impairing brain function and the ability to pay attention. But how this filtering normally occurs is unclear.

Researchers study reflexes to map the neurons and neurological circuits required for this filtering process. For instance, a loud sound may cause a person to jump. But if a person hears footsteps or other sounds before that loud sound, they won't startle easily. Zebrafish are particularly useful models to study sensory filtering. They are transparent, allowing researchers to watch neurons fire in response to stimuli. Furthermore, fish brains have most of the same basic components as human brains, allowing researchers to make inferences about human brain function.

The study was led by Kathryn Tabor, Ph.D., and Harold Burgess, Ph.D., of the Eunice Kennedy Shriver National Institute of Child Health and Human Development (NICHD). They analyzed the zebrafish startle reflex, which occurs when fish hear a sound and dart away, and how this reflex is muted when another sound is delivered less than a second before the target sound. This muted startle response, which is also seen in people, is called prepulse inhibition.

Through genetic experiments and detailed imaging, the study team identified two clusters, about 15 neurons each, that are responsible for prepulse inhibition in zebrafish. The neurons are located close to Mauthner cells, which are the neurons responsible for the startle reflex in fish. The team found that the two clusters of neurons can mute the startle reflex by preventing sound information from reaching Mauthner cells, thereby stopping signals that lead to the startle response.

"Our study is the first to identify precisely how cells control prepulse inhibition in vertebrates," said Dr. Burgess, senior investigator in the NICHD Section on Behavioral Neurogenetics. "The findings reveal a mechanism that prevents the brain from being flooded with too much information."

The researchers suspect a similar pathway operates in mammals, including people, but future studies are needed to confirm this hunch.