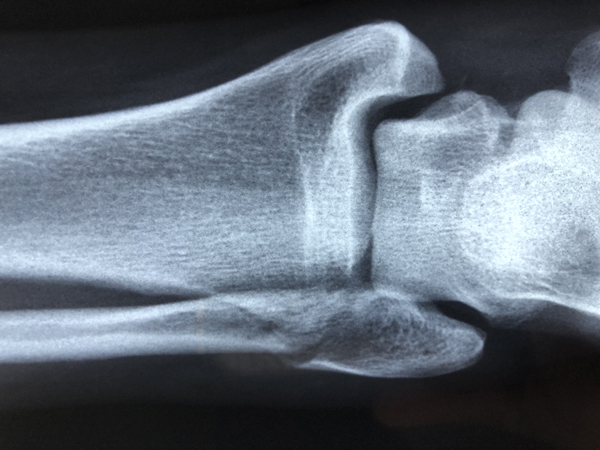 To reach their adult proportions, bones mature on separate time scales, with the long bones like those in the arms and legs maturing much more slowly than shorter bones, like those in the fingers and toes, according to a study by researchers at the National Institutes of Health. The study results may lead to new insights and potential treatments for disorders in which bones fail to grow normally. It appears in PLOS Biology.

Bone development takes place at the growth plate, an area of tissue near the end of each bone. To better understand how bones grow and reach their adult length, the researchers tracked the growth plates of young rodents by labeling the bone with calcein, a drug that gives off a green light. They tracked cell division in the growth plates by measuring how much of the drug bromodeoxyuridine had been taken into cells. This drug is incorporated into DNA when cells are rapidly dividing. The researchers also measured gene activity in the bones throughout their growth cycle. 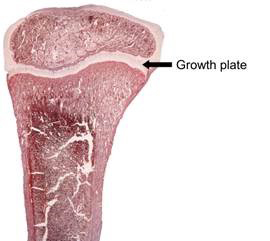 -Cross section of a rabbit bone showing the growth plate. Image courtesy of the National Institutes of Health

The researchers found that, in early life, bone growth proceeds rapidly, due to rapid cell division in the growth plates. The rapid growth is driven by the release of numerous growth factors, or substances that stimulate cell division. As the rodents grow older, release of these growth factors decreases, and the rate of cell division drops. As a result, bone growth slows and eventually stops as adulthood approaches. This decline in growth is ultimately the result of programmed aging in the growth plates, the authors stated. The researchers refer to this programmed aging as “growth plate senescence.” The process unfolds more rapidly in small bones than in their longer counterparts, with growth in the bones of the fingers and toes slowing down and stopping sooner than growth in bones of the arms and legs, resulting in the different lengths of the various bones.

Similar patterns were observed in cell division and in genes associated with cell growth. Activity reached its peak in young bones but declined as the bones matured. Conversely, as the bones matured, genes associated with reduced cell growth increased their activity. Again, these age-related changes in gene activity progressed more rapidly in smaller bones than in longer ones.

“The differences in bone lengths result, in large part, from different rates of aging in the growth plates,” said the study’s senior author, Jeffrey Baron, M.D., head of the section on growth and development at NIH’s Eunice Kennedy Shriver National Institute of Child Health and Human Development. The study also included an author from NIH’s National Heart, Lung and Blood Institute.

Dr. Baron explained that understanding the basic mechanisms that control bone growth is important because some children have genetic abnormalities that impair this growth. These abnormalities are known as skeletal dysplasias and may result in bones that are unusually short and deformed. Skeletal dysplasias can lead to disability, health problems, and even death. Studying bone growth may ultimately lead to new treatments for these disorders.