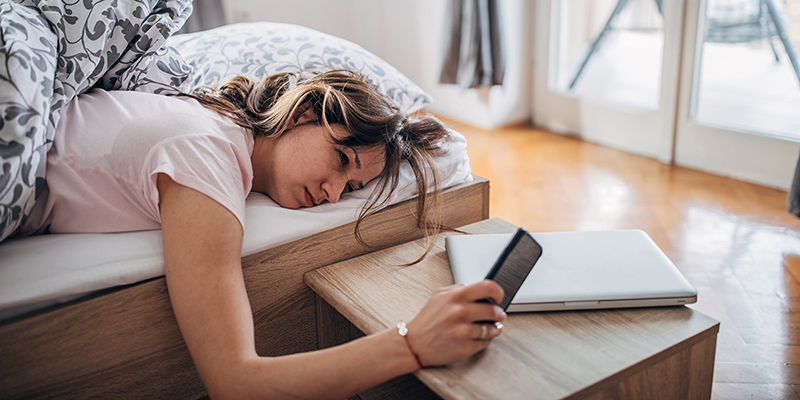 Sleep disturbances, common in women with polycystic ovary syndrome (PCOS), do not appear to hinder conception and live birth rates for women undergoing treatment for infertility, suggests a study funded by the National Institutes of Health. In addition, the researchers found that for women with PCOS, insulin resistance—a risk factor for type 2 diabetes—was associated with lower conception and live birth rates.

The study was conducted by Esther Eisenberg, M.D., M.P.H., of the Fertility and Infertility Branch of NIH’s Eunice Kennedy Shriver National Institute of Child Health and Human Development (NICHD), and colleagues in the NICHD’s Cooperative Reproductive Medicine Network. It appears in the Journal of Clinical Endocrinology and Metabolism.

PCOS is characterized by irregular or missing menstrual periods (due to lack of or infrequent ovulation), high levels of androgens (male hormones) and small cysts of the ovaries. Women with PCOS are also at higher risk of diabetes and heart disease. Unexplained infertility refers to infertility without a specific or  identified cause.

Previous studies have found associations between sleep disorders in reproductive-age women and menstrual irregularities, miscarriage, and adverse pregnancy and birth outcomes. However, little is known about the potential relationship between sleep problems and infertility in this group.

Women with PCOS have a higher risk for obstructive sleep apnea, which occurs when the upper airway becomes blocked repeatedly during sleep, reducing or completely stopping airflow. Obesity is a common cause of sleep apnea in adults, as obese people have increased fat deposits in their necks that can block the upper airway. Although obesity is common in women with PCOS, the frequency of obesity in women with the condition does not explain their high prevalence of sleep apnea and sleep disturbances.

The researchers undertook the current study to investigate the potential role of sleep disturbances in women with PCOS and unexplained infertility disorder on conception and live birth rates. To conduct the study, they analyzed responses to a sleep questionnaire completed by women participating in two prior clinical trials. In one, 739 women with PCOS seeking pregnancy were randomized to treatment with two different ovulation-inducing drugs. In the other study, 869 women with unexplained infertility undergoing artificial insemination were treated with either hormones or ovulation-inducing drugs.

Study participants with PCOS were more likely than those with unexplained infertility to report sleeping for less than 6 hours per night (6.1% vs. 2.7%), to snore habitually (37.8% vs. 19.0%), and to be sleepy during normal waking hours (12.0% vs. 8.6%). More PCOS patients had high fasting insulin levels (a risk factor for type 2 diabetes) than did women with unexplained infertility (60.8% vs. 26.2%). Participants with PCOS also were more likely to have metabolic syndrome—a group of risk factors for heart disease and diabetes—34.0% vs.13.0%.

Sleep disturbances were not associated with conception or live birth rates in women treated for either condition.

“It is reassuring that women with sleep disturbances have similar conception and live birth outcomes to those without sleep problems when they are treated with various ovarian stimulation treatments,” Dr. Eisenberg said.

Future studies are needed to determine if adding treatment for insulin resistance to infertility treatments for these groups of patients might improve live birth outcomes.