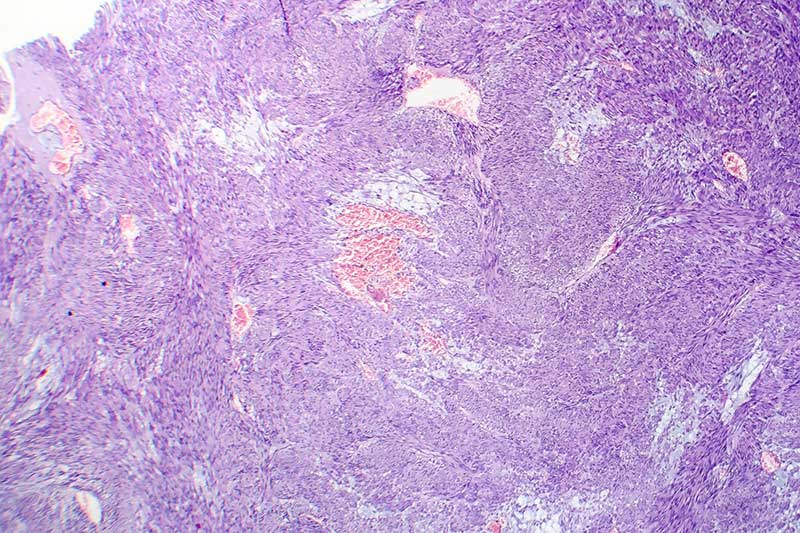 In a study of mice, NIH-funded researchers have developed a prototype technique for shrinking uterine fibroids—sometimes painful, noncancerous tumors that form in the uterus. The method involves encasing a tumor-killing drug in nano-sized spheres called liposomes and delivering them directly to the fibroids through the bloodstream. The findings set the stage for studies to determine if the method is safe and effective for treating fibroids in people.

The study was conducted by Mostafa A. Borahay, M.D., Ph.D., of Johns Hopkins University, and colleagues. It appears in Reproductive Sciences. Funding was provided by NIH’s Eunice Kennedy Shriver National Institute of Child Health and Human Development.

Fibroids, or leiomyomas, are noncancerous tumors that grow in or on the wall of the uterus. They may cause pain and abnormal uterine bleeding. They also may make it difficult for a woman to get pregnant and maintain a pregnancy. Although they can be treated, fibroids lead to about 300,000 hysterectomies in the United States each year.

The compound 2-Methoxyestradiol (2-ME) has been found to hinder reproduction of certain tumor cells and to halt the development of new blood vessels that tumors need to survive. Previously, researchers have found that 2-ME kills fibroid cells in laboratory cultures and hinders the growth of fibroid tumors.
However, studies in animals and humans have found that 2-ME is rapidly broken down in the body before it can reach concentrations high enough to affect tumors.

The researchers sought to deliver 2-ME directly to fibroids. They encapsulated the drug in liposomes—nano-sized spheres made up of phospholipids, the fatty material found in cell membranes. Previous studies found that, when injected into the blood stream, liposomes would travel through the body until they lodged in the leaky, misshapen blood vessels supplying tumors. Eventually, liposome membranes break down, releasing the drug they contain directly into the tumor—before it can be broken down or excreted from the body.

The researchers injected the 2-ME-containing liposomes into a strain of immune-deficient mice that had received transplants of human fibroids. After 28 days, tumors of the treated mice were about 30% smaller than those in control animals. The tumors contained fewer multiplying cells and a higher proportion of dead cells, indicating that the drug was reaching its target.

The researchers concluded that, pending further research, liposomes containing 2-ME potentially could provide a treatment for women with fibroids.

The researchers said additional research is needed to determine if liposomes containing 2-ME are safe and effective for treating people with fibroids.