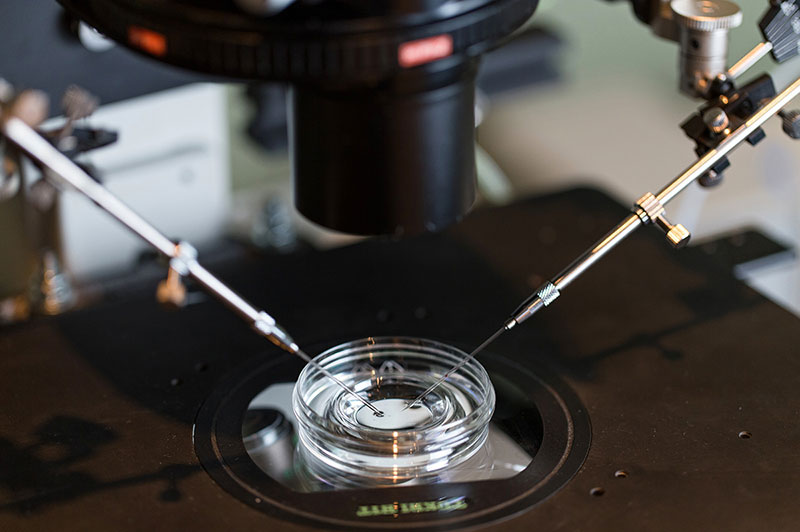 A mouse study funded by the National Institutes of Health suggests that a step in the in vitro fertilization (IVF) procedure could account for the higher rate of complications in pregnancies resulting from this form of assisted reproductive technology (ART). The researchers linked the culture of embryos in laboratory dishes after fertilization with impaired growth of the placenta, smaller fetal size, and a higher risk of preeclampsia, a serious pregnancy-related blood pressure disorder.

The study was conducted by Marisa Bartolomei, Ph.D., at the University of Pennsylvania, and colleagues. It appears in Development. The study was funded by NIH’s Eunice Kennedy Shriver National Institute of Child Health and Human Development.

Pregnancies resulting from ART have a higher risk for abnormal development of the placenta, preterm birth, miscarriage, preeclampsia and other pregnancy complications, and babies born too small, or too large, for their gestational age. Researchers do not know whether these risks are because of infertility treatments, couples’ underlying infertility, or a combination of the two. Previous studies of mice have found excessive growth of the placentas of fetal mice conceived by ART, as well as epigenetic changes to placental DNA—chemical modifications of the DNA, but not changes in the makeup of the DNA itself.

“The question has always been ‘Is increased risk a function of infertility or is it due to these procedures?’ because you’re doing all these manipulations outside the normal environment,” Dr. Bartolomei said.

IVF involves five steps: stimulating the ovaries with hormones so the egg will mature, a surgical procedure to retrieve the mature eggs from the ovary, mixing the egg with sperm to fertilize it, incubating the fertilized egg in a laboratory dish until it develops into an embryo, and transferring the embryo into the uterus.

For the current study, the authors isolated these steps, established pregnancies in mice after each procedure, and observed how the animals’ pregnancies progressed.

Compared to naturally occurring pregnancies, placentas resulting from embryos conceived naturally and transferred to another animal’s uterus were larger, and the fetuses grew more slowly, until mid-pregnancy. These conditions also occurred in female mice whose eggs were stimulated to mature with hormones and fertilized naturally, whose embryos resulted from IVF, and whose eggs were fertilized in vitro and cultured in laboratory dishes before transfer.

Mid-way through pregnancy, all the fetuses caught up to those in natural pregnancies, except for those resulting from the cultured embryos. In these pregnancies, placentas remained large, fetuses were smaller, and placental DNA underwent epigenetic changes. Mice carrying fetuses resulting from cultured embryos also had higher levels of sFLT-1, a protein produced by the placenta and associated with preeclampsia.

The authors called for additional research on understanding the conditions the embryo is exposed to in the uterus and matching these conditions for cultured embryos.