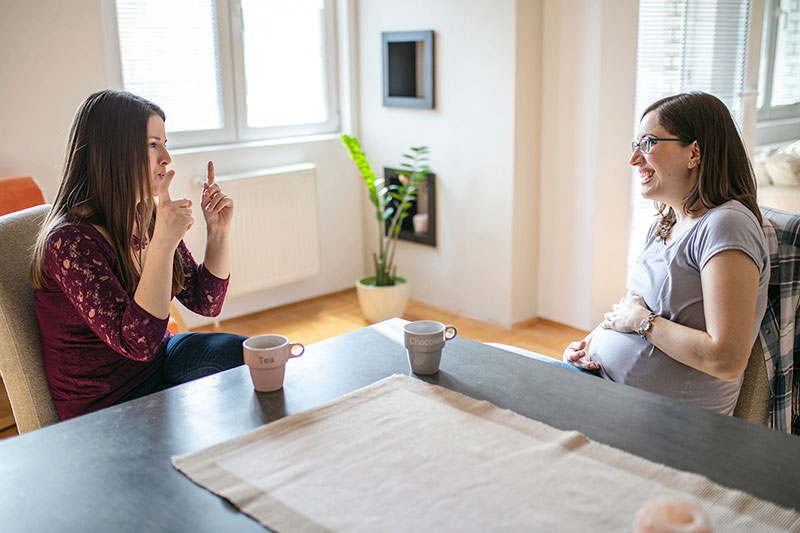 Compared to other women, deaf and hard of hearing women have a higher risk for pregnancy and birth complications such as gestational diabetes and blood pressure disorders, according to a study funded by NIH’s Eunice Kennedy Shriver National Institute of Child Health and Human Development. Moreover, infants of deaf and hard of hearing women were more likely to be born preterm, have low birth weight, and receive a low Apgar score—a screening test used to determine the baby’s need for additional medical services.

Causes of these disparities have not been determined, but the researchers believe that the difficulty health care providers face in communicating with deaf and hard of hearing individuals may play a large role. The researchers noted that other studies have found that poor communications between providers and patients has been linked to patients’ poor adherence to treatment and lack of awareness of healthy behaviors. The study authors called for more research to determine the causes of the disparity and how to eliminate it.

The study was conducted by Monika Mitra, Ph.D., of Brandeis University, and colleagues. It appears in the American Journal of Preventive Medicine.

Nearly 5% of U.S. women ages 18 to 39 report having hearing loss, the study authors noted. The researchers analyzed information from a database of pregnancies and births in Massachusetts. The database includes birth certificates, fetal death reports, and hospital and discharge records for infants and their mothers. The analysis focused on single births from 1998 to 2013. Among the more than 1 million births during this period, slightly more than 2,500 were to deaf and hard of hearing women.

Chief among the possible explanations for the findings are communication difficulties, the authors wrote. Nearly 42% of the deaf and hard of hearing women in the study reported using a language other than English to discuss health care issues. The researchers did not have access to data on which languages the women used, but believe it is likely that a large proportion used American Sign Language. They noted that previous studies have found that health care providers often fail to meet the needs of deaf signers. Similarly, other studies have found that hearing loss is a major barrier to health communications among the general population with a hearing loss, even for non-signers.

The authors noted that deaf and hard of hearing women in the study were more likely to have smoked during pregnancy, which also increases the risk for preterm birth and other complications.

The authors also noted that more than 400 genes have been linked to hearing loss, and it is possible that these genes also convey other health risks that could influence pregnancy and labor. The authors added that deaf and hard of hearing individuals are at a higher risk for stress, depression, anxiety, and interpersonal violence, all of which may influence pregnancy and birth outcomes.

The authors called for additional research to understand the experiences of deaf and hard of hearing women during pregnancy and childbirth and to develop effective interventions.

Mitra, M, et al. Pregnancy, birth, and infant outcomes among women who are deaf or hard of hearing. American Journal of Preventive Medicine. 2020.