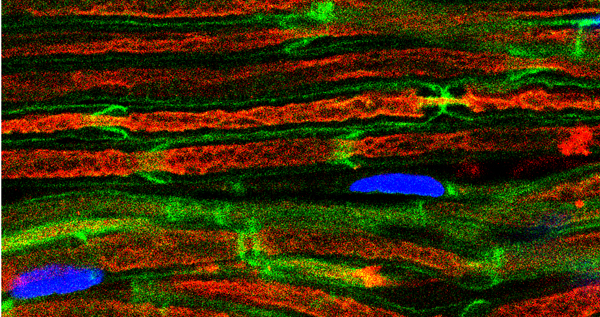 Schwann cells—which make the insulating material that coats nerves found outside of the brain and spinal cord—require a specific enzyme to produce the insulation, according to an NIH study. The insulating material, known as myelin, is critical for nerve cell projections called axons to convey electrical signals, such as those needed to move muscles in a limb. The discovery that the enzyme, phosphatidylinositol 4-kinase alpha (PI4KA), is essential to the myelination process may help researchers better understand diseases, such as multiple sclerosis, that disrupt myelination in people. The study appears in the June 4, 2018, issue of Cell Reports.

Understanding how myelin is formed around axons could enable researchers to develop effective therapies for neurodegenerative diseases—those in which components of the nervous system break down over time, resulting in problems with movement, speech, and other functions.

The enzyme PI4KA is abundant in the brain but surprisingly little is known about its role in the nervous system. PI4KA is affected by certain viral infections, as some types of viruses hijack the enzyme to make more copies of the virus, spreading the infection to other cells.

To understand the role of PI4KA in the nervous system, a research team led by Tamas Balla, M.D., Ph.D., and Alejandro Alvarez-Prats, Ph.D., of the Eunice Kennedy Shriver National Institute of Child Health and Human Development (NICHD), created mice that lacked PIK4A in Schwann cells. The mice had symptoms resembling those seen in neurodegenerative diseases, including leg tremors and an abnormal gait, affecting mainly the hind legs, that progressively worsened.

In the mutant mice, nerves controlling the hind legs could not conduct signals like normal nerves. Known as sciatic nerves, these nerves are the longest in the body, running from the lower part of the spinal cord down through the legs. Sciatic nerves from mice missing PIK4A were misshapen, lacked important lipids and some proteins, and had significantly thinner myelin sheaths.

The research team found that PIK4A was important for maintaining the actin cytoskeleton , the internal scaffolding that stabilizes cells, helps them to move, and allows Schwann cells to form myelin sheaths. The team also discovered that PIK4A is necessary to generate the lipids that make up Schwann cells’ plasma membrane , which is essential for producing the layers of myelin that wrap around axons.

“Our study highlights a critical role of PI4KA in maintaining the plasma membrane, which is especially important during myelination,” said Dr. Balla, senior investigator of the NICHD Section on Molecular Signal Transduction. “This information may help us identify useful therapeutic targets for treating neurodegenerative diseases.”

“Because PIK4A also creates the proper membrane lipid environment for the replication of some kinds of viruses, it may represent a link between certain viral infections and defective myelin formation or demyelination,” added Dr. Alvarez-Prats, a research fellow in the Section on Molecular Signal Transduction.

Currently, the researchers are exploring the link between PI4KA and the molecules that regulate the actin cytoskeleton.