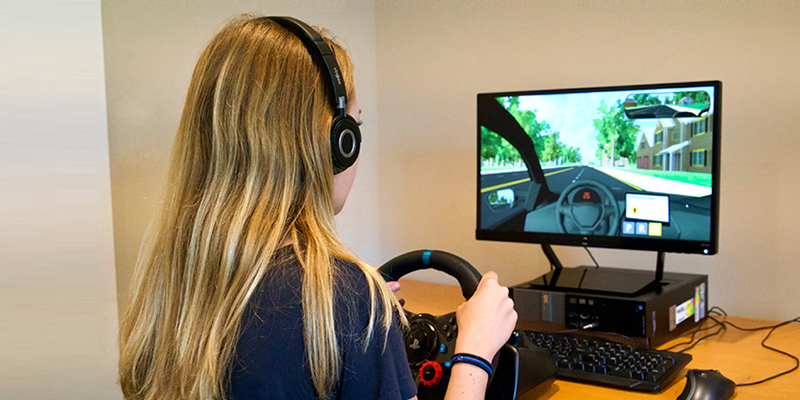 More information about the virtual driving assessment is available at: https://injury.research.chop.edu/research/teen-driving-safety/virtualdriving- assessment

New drivers who performed poorly on a computerized driving simulator were more likely to fail their road test, according to a study funded by the National Institutes of Health. The findings suggest that the virtual driving assessment (VDA)—which mimics situations in which new drivers are more likely to crash—can identify drivers lacking the skills to avoid crashes so they can benefit from interventions on how to reduce their crash risk.

The study was conducted by Flaura K. Winston, M.D., Ph.D., at Children’s Hospital of Philadelphia, and colleagues. It appears in Transportation Research Part F: Psychology and Behaviour. NIH funding was provided by the Eunice Kennedy Shriver National Institute of Child Health and Human Development.

According to the U.S. Centers for Disease Control and Prevention, motor vehicle crashes were the second leading cause of death for U.S. teens in 2019, with almost 2,400 13- to 19-year-olds killed in crashes and about 258,000 treated in emergency departments for injuries received during a crash.

Although researchers have attempted to use computerized driving simulators to train young drivers, few have used virtual driving to assess driving performance to identify those who are at a higher crash risk. Studies in virtual driving performance assessment have involved small samples that could not be generalized to a large population. Also, most were conducted after new drivers had received their licenses, when novice drivers are already in the period of the highest crash risk.

In the current study, researchers collaborated with the State of Ohio, which offers driver license applicants an opportunity to complete a VDA immediately before the on-road examination. The VDA is a 15-minute, self-guided simulated drive designed to expose drivers to the most common serious crash scenarios while assessing driving skills, such as basic vehicle control, lane position, following distance, and awareness and avoidance of hazards. Results of the VDA are delivered in a personalized feedback report to each driver. The VDA software can be deployed on a large scale and is delivered on a standard PC with a monitor, mouse, keyboard, headphones, and a USB-based steering wheel and pedals. The study authors compared the VDA performance of nearly 33,000 license applicants to their on-road examination results.

The authors used VDA data to create a set of 20 distinct driving skill clusters that represent driving performance in such areas as vehicle control, braking, acceleration, and tendency to speed or tailgate. The researchers grouped the Driving Skill Clusters into 4 major Driving Classes allowing them to identify drivers who are not prepared for safe driving: No Issues (were careful and skilled drivers); Minor Issues (had minor vehicle control deficits), Major Issues (had problems controlling a vehicle and a tendency to take risks) and Major Issues with Aggression (had more control issues with reckless and risk-taking behaviors).

Compared to the average of all license applicants who took the VDA in Ohio, those in the No Issues and Minor Issues classes were 29% and 11% less likely to fail the road examination. On the other hand, the two more problematic Driving Classes, the Major Issues class and Major issues with Aggression class, were 34% and 19% more likely to fail the on-road examination, respectively.

The researchers evaluated the VDA for identifying under-prepared drivers by checking whether having taken driving classes predicted the likelihood of failing the on-road examination. The youngest drivers subject to Ohio’s comprehensive driver training policy (mandated driver education including behind-the-wheel training for applicants under 18 years and a 6-month permit holding period), were more likely to belong to the No Issues and Minor Issues Driving classes.

The authors said their findings indicate that the VDA is helpful in identifying new drivers who lack adequate driving skills to avoid crashes. Interventions designed to increase skills before licensure may be helpful in reducing risk for unsafe driving and crashes immediately after new drivers receive their licenses, when crash risk is highest.

The authors called for additional studies to determine if VDA scores are directly linked to crash rates after drivers receive their licenses and to determine whether cognitive and personality factors play a role in VDA performance and unsafe driving.