NIH-funded study may have implications for pediatric cancer treatment 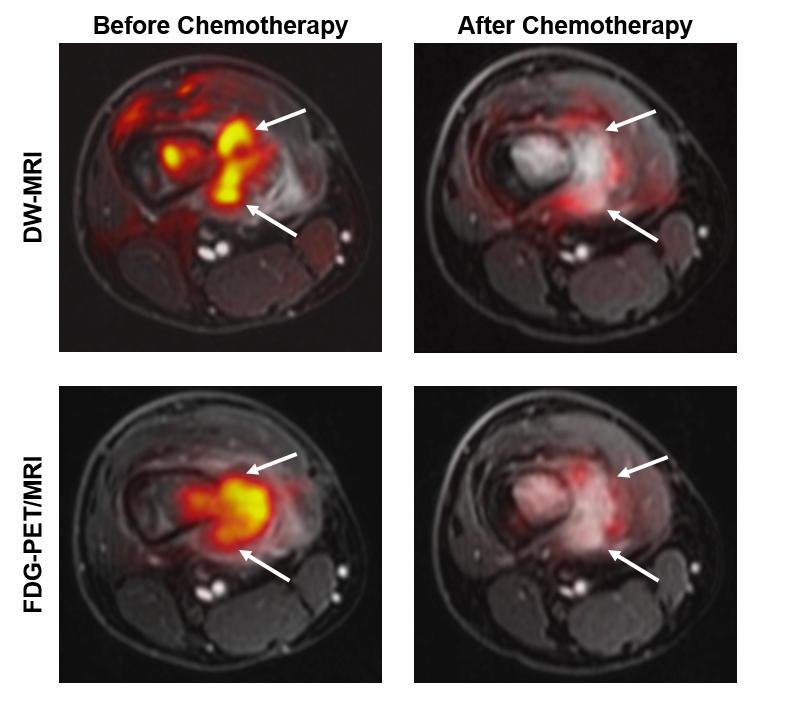 Whole body diffusion-weighted magnetic resonance imaging (DW MRI) may aid in the assessment of cancer treatment response in children and youth at much lower levels of radiation than current approaches, suggests a small study funded by the National Institutes of Health. The results appear in Radiology.

Researchers compared DW MRI, which measures the density of tumors by tracking the movement of water molecules in tissue, to an established technique, fluorine 18 fluorodeoxyglucose positron emission tomography (FDG PET). FDG PET is typically used with computed tomography (CT) scans and measures tumor metabolism after an injection of radioactive glucose.

Both techniques showed significant agreement in tracking tumor response to therapy, raising the possibility that DW MRI might one day be used in place of CT scanning, either together with FDG PET or alone, without the need to inject radioactive glucose. This new approach could reduce radiation exposure by 80% for combined FDG PET/DW MRI and fully eliminate radiation exposure for tumors that can be evaluated with DW MRI only.

“Advances in pediatric cancer treatment have led to more survivors, but radiation exposure from current imaging techniques raises the risk of new cancers later in life,” said George P. Giacoia, M.D., of the Obstetric and Pediatric Pharmacology and Therapeutics Branch at NIH’s Eunice Kennedy Shriver National Institute of Child Health and Human Development (NICHD), which provided funding for the study. “These initial results on DW MRI are promising, but they need to be confirmed by additional studies.”

In the current study, 56 children and youth (ages 6 to 22 years old) completed 112 DW MRI and FDG PET scans. Participants had either lymphoma (cancer that begins in the lymphatic system) or sarcoma (cancer that starts in bone, muscles and other soft tissues). The authors explained that the study included only two tumor types because pediatric cancers are rare. They added, however, that they believe their study encompasses the largest number of PET/MRI scans obtained in a pediatric population to date.

Researchers simultaneously performed the two scans on the study participants before their treatment began and then after the first few weeks of chemotherapy. Evaluating the therapy response early allows clinicians to switch to a potentially more effective treatment if the tumor continues to grow. The authors found that the two methods yielded similar results, though in some patients FDG PET detected therapy response sooner than DW MRI. They concluded that more studies are needed to confirm their results in a larger number of patients and for different tumor types.

The study was conducted by Heike E. Daldrup-Link, M.D., Ph.D., of Stanford University, and colleagues. Additional funding for the study was provided by NIH’s National Heart, Lung, and Blood Institute.