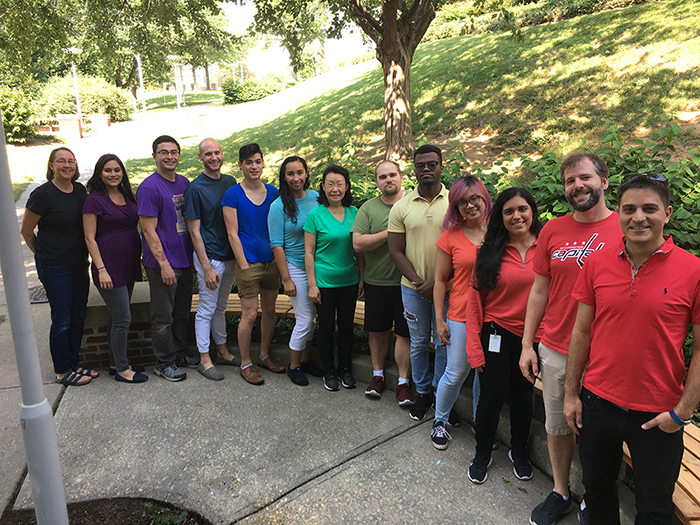 NICHD researcher Gisela Storz, Ph.D., has never been afraid to ask questions, even when she was just an undergrad at the University of Colorado in the 1980s. Her boldness and persistence have served her well, not just in scientific pursuits, but also in her quest to improve equity and diversity in the workplace. She applies her keen observation skills to all subjects, from odd data that other researchers may ignore, to equity problems entrenched in science and technology career fields.

“I hate things that are unfair. I think that’s always been the case. My parents kept reports I had in preschool, and a teacher said I didn’t like things being unfair,” said Dr. Storz. “I’m also persistent. If things don’t work out, I try again. I work hard. I think those are the reasons I’ve found some success in my career.”

Growing up in Colorado

Dr. Storz and her siblings are first-generation Americans. Her parents met in a laboratory in Germany, when her mother taught her father how to inject mice. The couple moved to the United States so that Dr. Storz’s father, a veterinarian, could pursue his doctorate. They stayed and eventually settled in Colorado, where Dr. Storz grew up.

“My parents gave us tons of responsibility, and so we learned to be independent. They would go to Europe for a week, and we’d be alone without anyone. I was 16 years old, so they gave me the car keys, and my younger siblings and I were alone. My sister was only 9 years old,” remembered Dr. Storz.

Dr. Storz had a natural interest and knack for science and math and recalled that her parents did not pressure her to pursue science as a career. “They expected us to do well but didn’t give us any expectations beyond that.”

She also remembers having good teachers in her science and math classes. She noted that most of these teachers were men, and in some classes, like calculus, most of the other students were male, too. But Dr. Storz found that her teachers were always very supportive and encouraging.

In 1980, Dr. Storz began her undergraduate studies at the University of Colorado, Boulder, where she also participated in a work-study program. “The very first day of my freshman year, I went to the bulletin board that advertised positions. There were a lot of secretarial, filing jobs, which I thought sounded deadly boring. But there was one position preparing the solutions for a cell biology lab. And I thought that sounded more interesting, so that’s what I applied for,” said Dr. Storz. She discovered that she loved the prep lab and would even go there to do her homework.

During her sophomore year, she typed up her curriculum vitae and went from one lab to another, asking if anyone would hire an undergraduate for the summer. Eventually, a plant biology lab offered her a position. Her colleagues in that lab gave her a light-hearted nickname. “I really pushed them because I really wanted to understand the research, so they got tired of me and called me an ‘uppity undergrad.’” Dr. Storz’s hard work paid off in 1986, when she was first author on a publication about carbohydrates  she isolated from maple syrup.

Because she knew she would faint at the sight of blood, Dr. Storz never considered medical school. She enjoyed research, so she applied to five graduate schools and chose the University of California, Berkeley. She thought she wanted to study biophysical chemistry, so during her first two rotations, she worked with prominent biophysical chemists. On a whim, she spent her third rotation, often considered a “throwaway” rotation, with molecular biologist Bruce Ames, Ph.D. There, Dr. Storz worked on bacteria and found that she loved it. It also suited her personality because experiments on bacteria can be done relatively quickly.

During her graduate years, Dr. Storz made a fundamental discovery on how bacterial proteins are regulated during oxidative stress—a series of damaging reactions that create hydrogen peroxide and can kill a cell (Sometimes, oxidative stress is activated by immune cells as a defense against disease-causing microbes). Dr. Storz studied a bacterial transcription factor called OxyR that, by breaking down hydrogen peroxide, activates a defense system against oxidative stress. At the time, scientists did not know how OxyR was regulated. Despite some skepticism about her theories, Dr. Storz showed that OxyR was regulated by oxidative stress itself. She was the first to show that the activity of a protein could be directly regulated by oxidation and reduction (i.e., the loss or gain of electrons), instead of by the addition of other chemical marks, as in phosphorylation.

Current graduate students may take comfort in knowing that Dr. Storz struggled with her experiments and, at times, even thought about quitting. “Research is hard,” she said. She also confided that no matter where she was in her career, she had to “doggedly keep plowing” past failed experiments and insecurities. “Persistence is the number one key to success,” she said.

As Dr. Storz planned for her postdoctoral career, she ran into an unexpected hiccup. She attended a scientific conference and gave a presentation on behalf of Dr. Ames, who was unable to go at the last minute. There, she met Carl Wu, Ph.D., a young principal investigator at the National Cancer Institute who was well known for his research. During the Q&A portion of her talk, she was a bit amazed when he asked her a question. The two kept in touch through letters and phone calls during the remainder of her thesis. She set up her postdoctoral fellowship with Frederick Ausubel, Ph.D., at Harvard University before she graduated, and noted that getting that position had required perseverance because he declined her initial application.

After graduation in 1988, Dr. Storz made a short detour to the National Institutes of Health in Bethesda, where she worked with Sankar Adhya, Ph.D., on the bacterial response to oxidative stress. In truth, she needed to figure out where her relationship with Dr. Wu was heading. After 6 months, she decided that, although the relationship was going well, too many women had sacrificed their careers for men or family. So, she left for Boston and began her fellowship with Dr. Ausubel. Dr. Wu followed her to Harvard, where he taught classes for one year.

While at another scientific meeting, Dr. Storz met Richard Klausner, M.D., who led the Cell Biology and Metabolism Branch at NICHD. He was impressed by her research acumen and wrote her a letter, which Dr. Storz still has, offering her an independent research lab where she could work on whatever she wanted. She joined NICHD in a tenure-track position in 1991. She and Dr. Wu got married in 1993, and by the late 1990s, had three children.

When it came to balancing work and children, Dr. Storz found it very difficult to bring work home or her children to the lab. At one point, with three children under the age of 3, it was fairly chaotic, she recalled. She would read papers when she could, often while she was nursing or during the kids’ sports practices or games.

As Dr. Storz established her new lab, she focused on oxidative stress and a regulatory RNA, OxyS, that she had first discovered by serendipity as a graduate student in 1985. She had continued her work on OxyS on the side, even during her postdoctoral years, trying to figure out what it did. In 1997, 12 years after its initial discovery, her lab published its work on OxyS, showing that it protected bacteria from DNA damage caused by oxidation. With collaborator Susan Gottesman, Ph.D., she also explored how many of these types of small RNA regulators might exist in bacteria, opening up new avenues of research. In 1999, Dr. Storz received tenure.

Today, Dr. Storz and her laboratory, the Section on Environmental Gene Regulation, continue to focus on small, difficult-to-study regulatory RNAs and proteins. “It’s important to point out that these small proteins are being totally ignored because they aren’t being annotated. In all genomes, it’s really hard to identify the sequences encoding small proteins that are actually synthesized. Our contribution is drawing attention to the fact that there’s this whole class of proteins people haven’t thought about,” she remarked. For example, in one project, the lab is assessing whether small regulators play an important role in bacterial membrane proteins, especially those involved in antibiotic resistance. If so, perhaps these small regulators could be exploited to curb antibiotic resistance.

“It’s fun when you have disparate pieces of data or pieces of a puzzle, and you put that last little piece together, and you understand what the other pieces of data meant. I really like those times in science, and I feel fortunate that I’ve experience quite a few,” Dr. Storz said.

Dr. Storz enjoys seeing people in her lab succeed, no matter what they decide to pursue. “I’m not a warm, fuzzy mentor necessarily. I think I’m a reasonably demanding mentor. But my goal is for people in my lab to achieve what they aspire to,” she said. 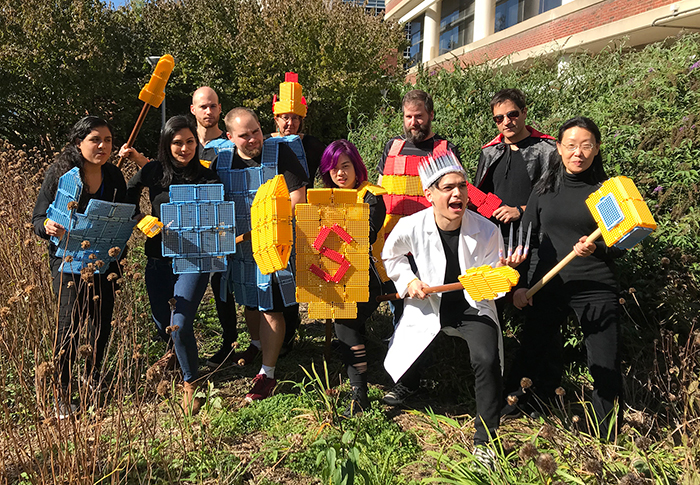 Dr. Storz (far back) with members of her lab during Halloween in 2017.
Credit: NICHD/NIH

It seems to be working because her trainees value the time spent in her lab. A former postdoctoral fellow, Matthew Hemm, Ph.D., now an associate professor at Towson University, said that he “consistently uses Dr. Storz as an example of how I need to act as the principal investigator of my own lab. Dr. Storz embodies the ideal researcher at the NIH: someone who is driven not only to do good science but also to improve the careers and lives of the people with whom she works.”

Her own personal experience helped Dr. Storz understand the value of quality mentoring and teaching students how to design and conduct experiments. She advises tenure-track investigators to attend as many meetings as possible and to accept all invitations to give talks, especially given how networking has benefited her own life and career.

Dr. Storz also demonstrated work-life balance by openly telling trainees that she had to leave work early to attend a child’s sporting event. She showed that making time for family did not make a person, especially a woman, less of a scientist. Several of her former female trainees remarked that Dr. Storz’s example freed them to be open about their family commitments when they started their own labs.

Another former postdoctoral fellow, Elizabeth Fozo, Ph.D., now an associate professor at the University of Tennessee, remarked that Dr. Storz taught her to be honest about what she can manage. “She advised me to keep my lab to a certain size so that I could be more in tune with what is going on. This management gives me a clear handle on the work being done, which is critical for integrity and ethics in research.”

Dr. Storz has received numerous mentoring, leadership, and scientific awards, including election to the National Academy of Sciences in 2012. She also serves in a senior leadership position as an associate scientific director within NICHD’s intramural research program.

Given her seniority at NICHD, Dr. Storz feels compelled to address larger problems encompassing all of science and research. She has always been mindful of diversity and tries to ensure that her lab has a balance of men and women from different backgrounds.

She also successfully spearheaded a trans-NIH group called the NIH Equity Committee, which seeks to improve equity and diversity across all the intramural programs at NIH by analyzing metrics and proposing solutions.

Dr. Storz is excited by the prospect of change. “You have to start somewhere. Let’s start with one thing and go from there.”