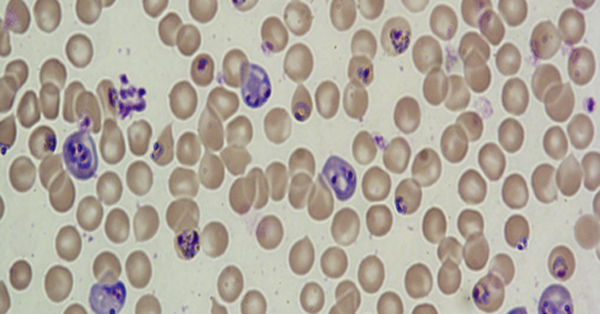 Researchers at the National Institutes of Health have a possible explanation for why iron can sometimes worsen malaria infection. By studying mice and samples from malaria patients, the researchers found that extra iron interferes with ferroportin, a protein that prevents a toxic buildup of iron in red blood cells and helps protect these cells against malaria infection. They also found that a mutant form of ferroportin that occurs in African populations appears to protect against malaria. These basic findings, published in Science, may help researchers and healthcare officials develop strategies to prevent and treat malaria infections, which numbered nearly 216 million worldwide in 2016.

“Our study helps solve a long-standing mystery,” said Tracey Rouault, M.D., the study’s senior author and a senior investigator at NIH’s Eunice Kennedy Shriver National Institute of Child Health and Human Development (NICHD). “Iron supplements can sometimes worsen malaria infection and, conversely, iron deficiency can be protective in some cases. Our findings reveal that ferroportin—its function, as well as its regulation by iron levels—helps to explain these observations.”

When they fed mice a high-iron diet, the researchers also found that a hormone called hepcidin regulates ferroportin in erythroid cells. The hormone, which is more abundant in high-iron environments, lowered ferroportin levels on erythroblasts (precursors to red blood cells) and, subsequently, in red blood cells. Additionally, hepcidin physically bound to ferroportin, preventing iron from being removed from the cells.

Next, the researchers sought to determine whether a ferroportin mutation, called Q248H, found in African populations protects against malaria. This mutation shields ferroportin from hepcidin’s effects. The team analyzed patient samples from two existing malaria studies.

“Our findings suggest that Q248H does protect against malaria, possibly explaining why it occurs in people who live in malaria-endemic regions,” said De-Liang Zhang, Ph.D., the current study’s lead author.

In one study, which enrolled children hospitalized for malaria in Zambia, the team found that nearly 20 percent of the 66 patients had the mutation. Children with the mutation tended to have fewer malarial parasites in their blood and tolerated their fevers for a longer period before coming to the hospital. While the trends were not statistically significant, they raise the possibility that Q248H reduces the iron available in the blood, therefore reducing the malaria parasite’s food source.

In the other study, which enrolled 290 pregnant women in Ghana, the researchers found that nearly 9 percent had the mutation. Women with the mutation were significantly less likely to have pregnancy-associated malaria, in which parasites accumulate in the placenta and can cause adverse pregnancy and birth outcomes.

“Given the importance of iron metabolism overall, we will continue studying the ferroportin mutation and explore its other potential health effects,” added Dr. Zhang.

Funding for the study was provided by NICHD and the National Institute of Allergy and Infectious Diseases.