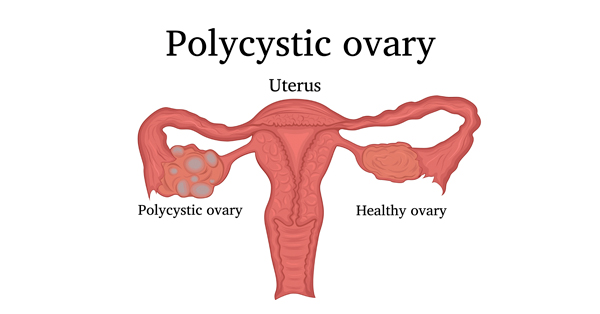 Women with polycystic ovary syndrome may have cysts (fluid filled sacs) on one or both ovaries. --Stock Image

Hormonal changes in women with polycystic ovary syndrome (PCOS), a common condition that contributes to infertility, may alter their intestinal microbe populations, according to a study funded by the Eunice Kennedy Shriver National Institute of Child Health and Human Development (NICHD), part of the National Institutes of Health. The researchers found that the higher the women’s levels of testosterone and similar hormones known as androgens, the less diverse their gut microbiomes tended to be. These findings may mean that androgens could influence the gut microbiome and that higher androgen levels could potentially play a role in the development of PCOS. Moreover, treatments to increase microbial diversity in the gut potentially could help treat the condition.

The study appeared recently in the Journal of Clinical Endocrinology and Metabolism. It was conducted by researchers at the University of California, San Diego; San Diego State University; and the Poznan University of Medical Science in Poland.

PCOS is a disorder that affects 5 to 15 percent of women worldwide. Women with PCOS are typically diagnosed with at least two of three conditions: higher androgen levels, irregular menstrual periods, or cysts (fluid filled sacs) on one or both ovaries. Along with infertility, women with PCOS are at higher risk for miscarriage and pregnancy complications, as well as obesity, Type 2 diabetes, and cardiovascular disease.

“Our findings suggest testosterone and other androgen hormones may help shape the gut microbiome in women,” said the study’s senior author, Varykina Thackray, Ph.D., of the University of California, San Diego. “Additional research is needed to determine whether specific gut bacterial species contribute to the pathology of PCOS and whether the microbiome offers potential pathways for treating this disorder.”