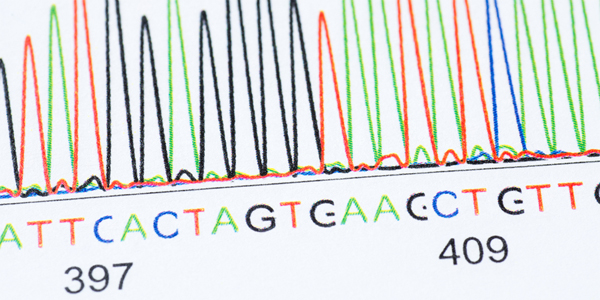 Genomic sequencing identified a higher risk of childhood genetic disorders in 9 percent of newborns who had passed standard screening for these diseases, according to researchers funded by the National Institutes of Health. The findings, from the BabySeq Project , are part of a larger effort to examine whether newborn genomic sequencing is suitable for routine health care.

The researchers, led by Alan Beggs, Ph.D., of Boston Children’s Hospital, published their findings in the American Journal of Human Genetics.

BabySeq is one of four research projects in the Newborn Sequencing in Genomic Medicine and Public Health (NSIGHT) Program, which is funded by NIH’s Eunice Kennedy Shriver National Institute of Child Health and Human Development and National Human Genome Research Institute. The program seeks to determine whether genomic sequencing can provide more useful medical information than what is currently available through newborn screening. The researchers are also examining the ethical, legal, and social implications of sequencing the genomes of newborns.

Currently, newborn screening programs test for about 30 potentially fatal or debilitating disorders by analyzing a few drops of blood taken from an infant’s heel. Identifying these conditions in infancy allows for treatment to begin early, before serious health problems can begin. Newborn genomic sequencing has the potential to identify many genetic conditions that current screens don’t detect, the study authors wrote. Similarly, genomic sequencing could potentially identify genetic differences in how children might respond to drugs and other treatments, so that treatment could be targeted to individual needs. Results of genomic sequencing provide a permanent record, which can be analyzed again in the future, whenever new healthcare needs arise.

Despite these advantages, genomic sequencing also presents challenges, the study authors wrote. Variants of some genes associated with diseases don’t always cause a disease. In other cases, identifying genes in childhood that could increase the risk for genetic conditions in adult life might create stress for families.

Of 159 newborns whose genes were sequenced, 127 had no documented health conditions and 32 were treated in newborn intensive care units. Of the total, 15 infants (9.4 percent) had mutations conveying higher risk for diseases that could be treated in childhood. These included gene variants associated with hearing loss and with several heart conditions. Another infant had a genetic variant that interfered with the ability to make an enzyme needed to process biotin, an essential nutrient. If untreated, biotin deficiency may cause skin rash, hair loss, and seizures. The child is now taking a biotin supplement, which the researchers expect will prevent any ill effects of the condition.

The researchers also received permission from the parents of 85 infants to test for conditions that arise in adult life but for which carriers of at-risk genes may benefit from screenings and other interventions. Of these, three infants had gene variants that increased risk: two with variants in a gene predisposing them to breast and ovarian cancer, another for Lynch Syndrome, which increases the risk for several kinds of cancer. Dr. Beggs added that learning about these risk genes—likely passed from parent to child—prompted the parents to seek genetic testing for themselves.

The researchers also found that 88 percent of newborns (140 out of 159) were carriers of a genetic disease—having one copy of a gene associated with a disease and a second, normally functioning gene. Such information could be used to counsel prospective parents about their risk for conceiving a child with a genetic disorder. Another 5 percent (8 out of 159) had genes that influenced how they would respond to certain drug treatments. Most of these children had a sensitivity to a given drug’s effects, and so would need less of it—information that could prove useful in their future health care.

The study authors concluded that newborn genomic screening can effectively detect disease risk and carrier status for a wide range of genetic disorders that currently cannot be detected from newborn screening tests or ascertained from an infant’s medical and family history.

"Sequencing results have the potential to raise questions that may be upsetting for parents, but could also lead to helpful or even lifesaving interventions," Dr. Beggs said. "Only time will tell how the costs—both financial and in terms of extra medical testing and family stress—balance out against the benefits. That's what we're really trying to find out."

The authors plan to follow the newborns’ medical history as they grow up. Information from their study, along with similar studies now under way, promise to inform healthcare providers on the responsible use of newborn genomic sequencing.