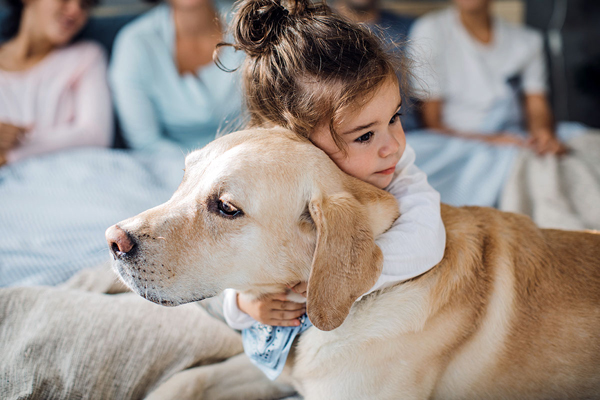 A new intervention may be able to help young children avoid being bitten by dogs, according to a study funded by the Eunice Kennedy Shriver National Institute of Child Health and Human Development (NICHD). Previous studies have shown that young children are vulnerable to dog bites because they are likely to misinterpret a dog’s body language and facial expressions, often confusing an angry dog with one that’s friendly and approachable. The study, led by Kerstin Meints, Ph.D., at the University of Lincoln in the United Kingdom, suggests that a video program may help children avoid dog bites by teaching them to recognize a dog’s warning signals. It appears in Frontiers in Veterinary Science.

The American Veterinary Medical Association  estimates that approximately 36 percent of U.S. households own a dog. A study by UK researchers found that dog bite injuries requiring hospital admission have increased, with nearly 17 percent of these injuries affecting children under the age of 10. Although dogs are common in many homes, their owners often misread their warning signs, particularly more subtle behavior, such as licking lips or yawning, which can be signs of stress.

Researchers showed 124 children ages 3 to 5 a series of videos of dog behavioral signals, ranging from mild, such as yawning and blinking, to threatening, such as snapping and growling. They then initiated a training phase for the children, showing them the previous sequences of dog behavioral signals, but with pre-recorded messages explaining the dog’s behavior and how to interpret it. Each intervention video ended with a safety instruction on how to respond to the dog’s signal.

Once the training intervention was completed, participants were tested to see whether they understood the dog behavior more accurately. Participants returned six months later for follow-up tests. Initially, the 3-year-olds had the most difficult time discerning distress signals, with 53 percent misinterpreting growling or snarling as signs of a “happy” dog. In addition, 17 percent of parents incorrectly assessed this behavior. After the interventions, researchers found significant improvement in identifying dog behavior: 81 percent of the 3-year-olds correctly identified the snarling and growling as warning signs and understood that they should leave the dog alone. Researchers followed the children in the study for up to one year and found that 76 percent of the kids remembered what they had learned about dogs’ warning signals.

The researchers say that their study is the first to offer an intervention to help children understand dog signaling and that it is possible to use video training to improve awareness and prevent dog bites.