Science Update: COVID-19 in third trimester may reduce level of SARS-CoV-2 antibodies transferred across the placenta

Findings may have implications for vaccine design, timing of vaccination during pregnancy 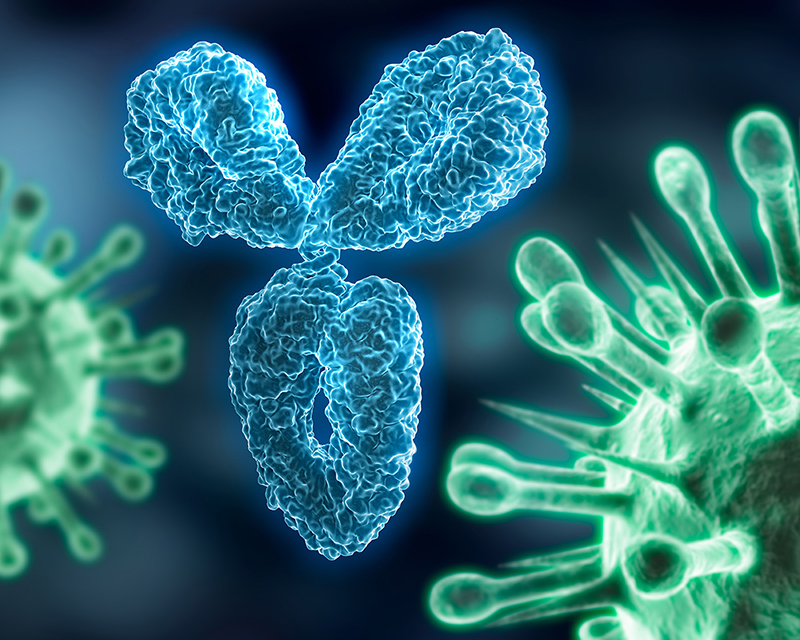 Computer-generated image of an antibody. The stem of the Y-shaped molecule must bind to receptors on the placenta’s surface before being transported into the placenta.
Credit: Stock Image

The findings could provide information for designing vaccines that spur the development of antibodies more likely to cross the placenta. The lower rate of antibody transfer was seen only when infection occurred in the third trimester of pregnancy and not in the second trimester, suggesting that vaccination might result in greater transfer of antibodies if given earlier in pregnancy.

The study was conducted by Andrea G. Edlow, M.D., of Massachusetts General Hospital, and colleagues. It appears in Cell. Funding was provided by NIH’s Eunice Kennedy Shriver National Institute of Child Health and Human Development, National Heart, Lung, and Blood Institute, and National Institute of Allergy and Infectious Diseases.

Antibodies are immune system proteins that target viruses, bacteria, and other organisms that have the potential to cause diseases. During pregnancy, antibodies cross the placenta and enter the fetal circulation, protecting the fetus, and later, the newborn from disease-causing organisms.

The study included 56 women in the third trimester of pregnancy, 22 with COVID-19 and 34 without the infection. The researchers compared antibody levels for SARS-CoV-2, influenza, and pertussis (whooping cough) in the women’s circulation to those in the umbilical cords after they had given birth. The women did not have active influenza and pertussis infections, but had made antibodies against these diseases after vaccination.

Antibodies for influenza and pertussis were found at comparable levels in the circulation and umbilical cord blood for the two groups of women. For both groups, pertussis and flu antibody levels were higher in the umbilical cords than in the mothers’ circulation, indicating that COVID-19 did not appear to affect transfer of these antibodies.

For women with COVID-19, levels of antibodies against SARS-CoV-2 were transferred across the placenta at a much lower rate than antibodies for pertussis and influenza. This lower antibody transfer was seen only in infections occurring in the third trimester of pregnancy and not in the second trimester. However, levels of a particular kind of antibody were transferred more efficiently from the mothers’ blood to the umbilical cord. This type of antibody flags an invader for destruction by immune cells known as natural killer cells, which target viruses. The researchers believe the higher transfer of this kind of antibody may compensate for the lower transfer of other antibody types, providing the newborn with some level of protection against COVID-19.

Transfer of antibodies across the placenta begins when the single stem of the Y-shaped antibody molecule binds to a special site, or receptor, on the placenta’s surface. The researchers found that in women with COVID-19 in the third trimester, the antibody stem is altered when carbohydrate molecules known as glycans attach, or bind, to it. These alterations, known as glycosylation, often occur during an infection and are thought to prime the antibody to interact with other cells and proteins made by the immune system to more efficiently target the organism causing the infection.

These findings have implications for the design of SARS-CoV-2 vaccines during pregnancy.

"Vaccine regimens able to drive high levels of the COVID-specific antibodies with glycosylation patterns favored by the placenta for selective transfer to the fetus may lead to better neonatal and infant protection," Dr. Edlow said.