Vaccines Protect Our Kids and Our Communities

A recent multi-state outbreak of measles has reignited national discussion about the importance of childhood vaccines. As a pediatrician, I am saddened that childhood diseases like measles are making a comeback. I have witnessed firsthand the debilitating impact that now-preventable infections can have on kids.

When I was a pediatric resident in the early 1980s, I cared for many children who were gravely ill as a result of Haemophilus influenzae Type b (Hib) infection. “H. flu” was once the most common cause of bacterial meningitis (and acquired intellectual disability) in children younger than age 5. But, after the introduction of Hib vaccines during the mid-1980s, Hib cases in this age group dropped by more than 99 percent. Today, when I ask a room of pediatric residents how many of them have seen even a single case of H. flu, often no one raises a hand.

That is how it should be. 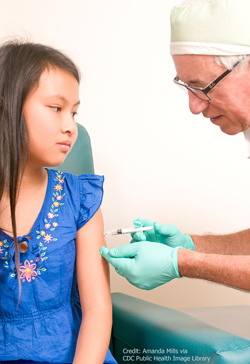 Those immersed in the current vaccine debate may not remember or have experienced severe childhood diseases such as polio. During the mid-20th century, poliovirus infection caused thousands of cases of paralysis each year. Following the introduction of polio vaccines in the 1950s, incidence plummeted in this country. According to the CDC, no cases of polio have originated in the United States since 1979 (PDF - 512 KB).

As director of the Eunice Kennedy Shriver National Institute of Child Health and Human Development at the National Institutes of Health (NIH), my concern is for our nation’s children. I believe passionately that we need to raise our kids in a world where they can thrive and be protected from preventable illnesses that threaten their health and even their lives. I understand that some parents have concerns about vaccinating their children, but the scientific evidence is overwhelmingly strong and consistent: vaccines are effective in preventing infectious diseases and in protecting our children’s health and development.

Widespread immunization also helps to protect those who cannot receive vaccines, including infants, pregnant women, and people with weakened immune systems. For this “community immunity” to take hold, a critical mass of vaccine-eligible people must get vaccinated.

When it comes to preventing infectious diseases, we are truly all in this together. I urge all medical providers, health and community leaders, and parents to help stem the spread of preventable diseases by supporting vaccinations.