January is Birth Defects month.  In commemoration, I’d like to take a look forward and a look back.  Ahead, the NICHD has embarked on an exciting new collaboration with other Institutes here at the National Institutes of Health to find novel ways to understand, prevent, and treat a wide array of birth defects affecting body parts and structure.  Glancing back, I’d like to recount the great strides we’ve made against neural tube defects, a group of sometimes devastating conditions affecting the brain and spinal cord.

But first, please allow me to clarify our terminology.  “Birth defects” was coined originally as a technical, descriptive term. Truly, no human being should ever be described as defective.  We all have health problems and none of us are “perfectly” formed.  (I think the term and concept of “variation” is useful and less pejorative, but will use the term “birth defects” here since my own view is not - yet - the generally accepted one.)  Some “defects,” like nearsightedness, would have conveyed a shortened lifespan in hunter-gatherer times, but, thanks to medical advances, are no more inconvenient than a trip to the ophthalmologist.  Others, like the inward turning of foot bones often called “club foot,” require more intensive medical involvement, but can largely be overcome.  For many others, we still search for effective treatments and preventive measures.

Now, for some good news:  I’m happy to announce the formation of the first Trans-NIH Structural Birth Defects Working group.  “Structural birth defects” refers to problems with body parts and structure, such as a missing, or misshapen, heart valves or cleft palate. “Trans-NIH” simply means that it involves the combined efforts of institutional entities across the NIH, rather than any single NIH Institute or Center.

People not familiar with the NIH may not know that most of the Institutes were set up to focus on specific diseases or organ systems.  For example, as its name implies, the National Heart, Lung, and Blood Institute focuses on research on problems involving the lungs and circulatory system.   Similarly, the National Cancer Institute focuses on the various human cancers.  This approach has led to great advances against such killers as heart disease, cancer, diabetes, and infectious diseases.

Unfortunately, the approach may fall short when it comes to birth defects.  This is because many birth defects involve not just one part of the body, but multiple organs and systems.  Birth defects can result from a variety of causes, sometimes environmental, sometimes genetic, and often both.

NICHD is uniquely positioned to lead this new, NIH-wide effort.  Unlike most other Institutes, NIH’s focus is on development through much of the life span, and is not limited to specific organs or systems.  NICHD will work with other institutes to coordinate projects that address birth defects that fall across a wide spectrum of NIH disciplines and missions.  In this effort, we hope to take advantage of the comparatively new field of genomics—the study of how genes interact with each other, and with the environment.  Many genes and gene networks involving birth defects are active early in embryonic and fetal life, when organs are forming.  Genes active at this time often control the development of multiple organ systems.  By understanding their interactions, we hope to find ways to effectively treat, and perhaps even prevent, many different types of birth defects.

Although it’s very rewarding, it’s sometimes difficult to show progress in preventing diseases and conditions.  It’s easy to see the results when a cast is removed and a once broken limb is mended.  However, few are likely to be impressed just because someone doesn’t get sick.

For this reason, I’d also like to commemorate this Birth Defects Prevention month by telling you about past successes in preventing a group of birth defects known as neural tube defects. These birth defects arise within the first month of pregnancy, before many women know they are pregnant.  They result from a failure of the developing spinal column to close fully around the spinal cord.  Neural tube defects can range from mild, and barely noticeable, to fatal.  Among the types of neural tube defects are spina bifida, which can result in partial or complete paralysis below the malformation, and anencephaly, in which an individual is born with little to no brain matter.

Neural tube defects are among the most common class of birth defects (PDF - 319 KB), affecting some hundreds of thousands of  births worldwide each year.  Research beginning in that late 1980s determined that the B vitamin folate was involved in the formation of the developing spinal column (the neural tube.)  Subsequently, a large body of research, some funded by the NICHD and some funded by others, found that women with low levels of folate were more likely than other women to conceive a child with a neural tube defect.  By the early 1990s, further research had shown that women who took supplements containing folic acid (the synthetic form of folate) in the months before, and shortly after, conception, greatly reduced the chances that their child would be born with a neural tube defect.

Based on these studies, in 1992 the Centers for Disease Control and Prevention recommended that all women of childbearing age consume a supplement containing 400 micrograms of folic acid each day to reduce the risk that their pregnancies would be affected by a neural tube defect.

Although some women heeded the recommendation, roughly 60 percent of women in the U.S. did not.  By 1996 the U.S. Food and Drug Administration mandated that flour and grain products be fortified with folic acid (PDF - 215 KB).  As this graph from the CDC shows, fortification was extremely successful, and rates of neural tube defects dropped internationally in areas where they were added to the grain supply. 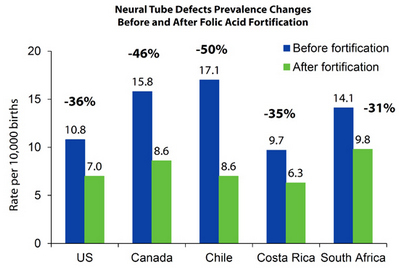 On a population wide basis, fortification has prevented many neural tube defects, in the U.S., and around the world.  Still, if you are a woman of child bearing age, it may not be enough to rely solely on fortified grain products.  Because neural tube defects occur in the weeks before many women know they’re pregnant, and because many pregnancies are unintended, the CDC recommends that all women of child-bearing age consume 400 micrograms of folic acid each day, either in a supplement, or by eating fortified foods, such as a fortified breakfast cereal.

Although folic acid can prevent many cases of neural tube defects, it won’t prevent them all, and for this reason, research is still under way.  Let me also mention two addenda to the folate fortification success story.

The Benefits of B12

In 2009, a team of NICHD and Irish researchers found that women with low levels of B12—those who eat little to no animal products, and those who can’t absorb B12 properly—also have an increased risk for having a child with a neural tube defect.  Again, the lesson from folic acid fortification applies here.  These women can greatly reduce the chance that their child will have a neural tube defect by taking a supplement.  Women who don’t consume animal products can do this with a vitamin pill containing B12, or some other form of supplementation, such as fortified breakfast cereals.  If they haven’t already, women who have difficulty absorbing B12 should speak to their doctors about injections of the vitamin.

Although neural tube defects can’t always be prevented, they can often be diagnosed before birth.  Myelomeningocele is a particularly serious form of spina bifida, in which the spinal cord protrudes through an opening in the spine.  Traditionally, surgery to put the spinal cord back in place and suture the opening has taken place after birth.

In 2011, a large NICHD Network study found that undertaking the surgery while the fetus was still in the womb could greatly improve outcome after birth. The fetal surgery reduced the need for follow-up surgery to place a shunt to prevent a dangerous buildup of fluid in the brain. The fetal surgical procedure also increased the chances that a child would be able to walk without crutches or other devices.  On the other hand, infants who underwent the prenatal surgery were more likely to be born preterm than were the infants who had the surgery after birth, when it was traditionally performed.  As with all infants born early, preterm infants in the study were at increased risk for a variety of health complications.  On balance, however, the infants who had the prenatal surgery fared better than those who had the traditional surgery.

When the NICHD was founded, just over 50 years ago, researchers were just beginning to understand the role of folate in the formation of the nervous system. Since then, substantial progress has been made in preventing neural tube defects and in ameliorating some of their consequences when not prevented.  It is our sincere hope that the work of the Trans NIH Structural Birth Defects group will help accelerate further progress in the prevention and treatment of structural variation.