Dr. Stéphane Philogene was appointed Director of OSPRA at the NICHD in January 2017. Before his current appointment, he served as the Deputy Director of the Office of Behavioral and Social Sciences Research (OBSSR), a component of the Division of Program Coordination, Planning, and Strategic Initiatives, in NIH OD. At OBSSR, he worked closely with the Director, providing leadership and direction in the development and implementation of programs to increase the scope and support of health-related behavioral and social sciences research at NIH. He led and coordinated the development and publication of the new OBSSR Strategic Plan. He was also instrumental in establishing NIH-wide scientific goals and strategic priorities in the behavioral and social sciences and in overseeing the daily operations of the office. He has more than 20 years of experience leading programs and initiatives in the areas of science policy, strategic planning, communication, and program evaluation.

Prior to Dr. Philogene’s appointment as OBSSR Deputy Director in March 2014, he was the Associate Director for Policy and Planning in OBSSR. During his tenure, he planned and managed the development and publication of the 2007 Strategic Prospectus and led the development of a number of scientific program initiatives for the office, including funding opportunity announcements in community-based participatory research, health disparities research, and social work research. For his work at NIH, he has received a number of awards, including several NIH Director’s Awards and NIH Awards of Merit.

Dr. Philogene was a Senior Executive Fellow of the John F. Kennedy School of Government at Harvard University. He holds undergraduate and graduate degrees in economics from the University of Florida and a doctorate in public policy from the School of Public Policy at George Mason University. 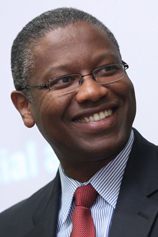