The content in this publication was current at the time it was published, but it is not being updated. The publication is provided for historical purposes only.​

The study design, methods, and results of the 1967-1984 study were published and strongly supported a recommendation that a phenylalanine (Phe)-restricted diet should be maintained throughout adolescence (Holtzman, Kronmal, van Doorninck, et al., 1916.66%; Azen, Koch, Friedman, et al., 1991). This recommendation was based on an evaluation of the Wechsler Intelligence Scale for Children-Revised (WISC-R) and the Wide Range Achievement Test (WRAT) standard scores at the age of 12 years for 95 children who had been diagnosed by newborn screening and had begun dietary treatment during the neonatal period. Dietary control of blood Phe <900 mmol/L was maintained in 23 of these children beyond 10 years of age; in 72 others, the blood Phe level was persistently >900 mmol/L at varying ages. Test scores were negatively correlated with age at initiation of diet and with blood Phe levels from ages 4 to 10 years, and were positively correlated with parent intelligence quotient (IQ) scores and age when dietary control was lost.

The findings of that study and others have gradually resulted in a philosophy of a "Diet for Life" at most clinics in the United States. In preparation for the Consensus Development Conference on Phenylketonuria (PKU), the National Institute of Child Health and Human Development (NICHD) authorized funding to conduct a followup study on the enrollees in the study, who are now 27 to 32 years old, and to compare the findings with the data collected on the subjects during childhood. The followup effort is still under way, and this abstract presents an initial summary of the results to date.

After a 15-year interval between the 2 studies, 59 of the 129 enrollees who were still active at the end of the original study were located and evaluated. There were no significant differences between those who were and those who were not evaluated as adults on diagnostic, treatment, demographic, or childhood psychometric variables. Seven of the 59 never discontinued diet, whereas 30 discontinued before 6.5 years of age, 12 between 6.5 years and 12 years of age, and 10 between 12 and 20 years of age. Among discontinuers, nine had 3 or more additional years of treatment.

Medical findings as reported by questionnaire and current medical evaluation are summarized in Table 1. Eczema was reported in 26 percent, recurrent headache in 28 percent, neurological signs in 26 percent, hyperactivity in 15 percent, and lethargy in 20 percent of the subjects off diet, and in none of those who remained on a Phe-restricted diet. Furthermore, these symptoms were more common in those who discontinued dietary treatment before 6.5 years of age. In those off diet, depression was reported in 24 percent, phobias in 24 percent, and unspecified mental disorders in 15 percent. In comparison, the on-diet group had only one reported episode of transient depression, and that was related to a medical product change. Intellectual development and academic achievement were measured by the Wechsler Adult Intelligence Scale-Revised (WAIS-R) and the WRAT-3, respectively. The mean standard scores have remained fairly stable since age 12, as shown in Figures 1 and 2. One interesting phenomenon is that arithmetic scores on the WRAT-3 are much improved in adulthood when compared with scores at age 12. Because extensive neuropsychological testing on a subset of 20 subjects is still in process, however, our followup study is incomplete at this time. 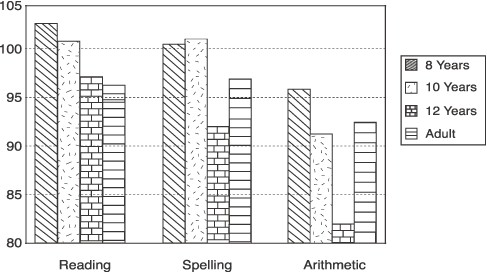 MRI codes ranged from 0 to 5, where 0 indicates complete normality and 5 indicates severe abnormality. One subject was rated as 0, six as 1, five as 2, and two as 3. There were no subjects in categories 4 and 5. By grouping ratings 0 and 1, the mean IQ of seven subjects was 112; by combining 2 and 3, the mean IQ in seven subjects was 102. Again, the sample is too small for meaningful comparisons. Five subjects remain to be studied, and these studies will be completed by September 2000.

* At end of PKU study in 1984.+ Plan to repeat MRI/MRS. Subject data were accidentally erased.

Continuers on diet had a higher mean full-scale IQ score of 108, which represents a significant increase over their 12-year mean WISC-R IQ ( p=0.03) score. (See Table 3.) Subjects who discontinued dietary treatment before 6.5 years of age had a mean IQ of 90, whereas those who discontinued dietary treatment between 6.5 and 12.5 years of age scored a mean IQ of 95. Those who stayed on diet longer than 12 years scored a mean IQ of 99. None of the mean scores of those off diet differed from their mean scores at age 12. WRAT-3 achievement test scores appear to be higher in those who remained on diet, although the sample size was too small for statistical testing.

*Change from 12-year WISC-R or WRAT score.
† p-values are for illustration only, due to small sample sizes.

The importance of blood Phe is shown by the progressive decline in adult mean IQ scores with increasing blood Phe.(See Table 4.)In 21 adults with blood levels <1,200 m mol/L (range 230 to 1,156), the mean IQ was 103.In 29 adults with blood levels >1,200 m mol/L, the mean IQ was 89. The difference of 14 points in IQ between the two groups is remarkable when one takes into account that the parental mean IQ of the two groups differed by only 2 points.

*Change from 12-year WISC-R or WRAT score.† p-values are for illustration only, due to small sample sizes.

Mutation studies were performed by a group in Glostrup, Denmark, headed by Flemming Güttler.A discussion of these is beyond the scope of this report, but it may suffice to say that only four subjects exhibited one mild mutation on chromosome number 12. Thus, the diagnosis of classical PKU was confirmed by the mutation studies.

In summary, the data collected so far favor diet continuation through adulthood. Both the higher frequency of reported medical and mental disorders and the lower cognitive test scores among discontinuers support this practice. In addition, the newer medical food products now available and the possibility, based on knowledge gained from MRI/MRS studies, of therapy with large neutral amino acids as an adjunct to dietary restriction of Phe, provide encouragement that care of individuals with PKU will be better in the future.