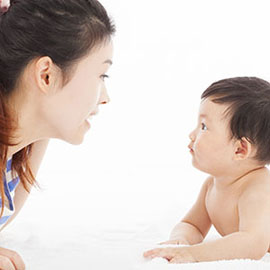 Dr. Valerie Maholmes: A home-visit program for parents previously investigated for child abuse, dramatically reduced the percentage of young children who were removed from their homes and placed in foster care, according to a study funded by the National Institutes of Health.  Central to the program are videotaped segments of parent-child play sessions.  A trained specialist then gives parents feedback on the interaction, encouraging parents to reflect on their children's social or emotional needs.

I'm Dr. Valerie Maholmes, Chief of the Pediatric Trauma and Critical Illness Branch at the NIH's Eunice Kennedy Shriver National Institute of Child Health and Human Development. Today, I'll be speaking with study author Dr. Monica Oxford, Interim Director of the Barnard Center for Infant Mental Health and Development and research professor at the University of Washington Department of Family and Child Nursing.

According to the Administration on Children and Families, state child protective agencies received 3.6 million referrals of possible child maltreatment in 2014.  The youngest children are the most likely to be victims of abuse and neglect, with nearly a quarter of them three years of age or younger.  The study authors noted that child maltreatment may have lifelong effects, with victims experiencing poorer health and earlier death.  Removal from the abusive environment may also have negative effects, as the instability of foster care may be stressful and worsen behavioral problems.

Researchers studied a program called "Promoting First Relationships," which seeks to help parents become more sensitive to their child's emotional and social cues. In addition to enhancing emotional bonds between parents and children, researchers found that placement into foster care dropped significantly among the families that completed the program.

The study, conducted between 2011 and 2014, enrolled 247 families with children between the ages of 10 months and two years, all with cases under review by Child Protective Services. Families were randomly assigned to either the home-visit program, which included 1-hour visits over a 10-week period, or a telephone-based service that included three, 30-minute sessions, and packets of resource and referral information mailed to each family.

The study findings were published in the November issue of Child Maltreatment.

Dr. Oxford, thank you for joining us.

Dr. Oxford: Thank you so much for having me.

Dr. Maholmes: Why don't we start with a basic question: Tell us about your study. Just walk us through it and tell us how your study worked?

Dr. Oxford: Families who had been investigated for child maltreatment were randomly assigned to one of two groups as you noted. In the 'Promoting First Relationships,' group, the home-visiting program, what would happen is the provider would come to the home and engage in specific activities that they were trained to do as part of the program. So we really structured this according to the tenets of 'Promoting First Relationships' intervention service. Part of that visit would be to videotape the parent and child playing together for 10-15 minutes, in addition to talking about some other aspects of child development and just really trying to connect with the parent.

But we do believe that one of the important aspects of this program is this video observation. The provider would return the next week and they would sit with the parent and play the video on their computer program and reflect together on what they saw. The provider is trained in observation and how to observe parent-child interaction. So they would give the parent positive feedback, for example, and positive instructive feedback about the strengths that they have. We are considered a strengths-based program and this enhances their confidence and competence - what a baby might be needing or feeling in the moment or during the interaction.

And this is especially useful when there is tension or a miscue between the parent and the child or if the child is starting to get fussy. We can stop the video and reflect: 'What do you think your baby's feeling right now?' And what we're trying to do is help the parent enter into the baby's mind and reflect, 'what is my baby feeling?' And then the follow-up question is, `what do you think he's needing?' Maybe he's needing a break, or maybe she's needing a nap or maybe the activity is going too quickly and the child is getting overwhelmed. So this is how we support the parent's capacity to really connect to and understand their child's social and emotional needs.

Dr. Maholmes: Well, that's very exciting. So why do this type of a study? Isn't it fairly intuitive that therapists visiting the home are going to have greater success than those who call parents on the phone?

Dr. Oxford: I think it does sound intuitive. However, we know from the research in home visiting, it's actually quite difficult to change parenting behavior. And the question is, `what do you do during that hour?' Do you teach certain activities or do you use video reflection or do you talk about reducing risk factors in their environment, such as job, you know, unemployment or giving increased education. We would change those outcomes. We wouldn't change parenting behavior. And when we're talking about child maltreatment, we really are talking about parenting behavior. So the important question is what do we do that creates the outcomes that we're looking for, and in this case, the outcomes that we're looking for is increased parent sensitivity, increased parent competence and knowledge and a reduction in child welfare placements and outcomes that are going to be harmful for the child over the course of their early years.

Dr. Oxford: Well, I think one of the key aspects of the study is we were able to get in the home right after a CPS [Child Protective Services] allegation for infants and toddlers, so for very young children because they are the highest risk group and if children end up in the foster care system in these early years, they're more likely to have a cumulative foster care placement history. So the question is, 'can you get in and provide a brief, this is only 10-visits, a brief home-visiting program that parents like and follow-through with, because that's an important question, do they follow through with the program? If they like it, they're more likely to follow through with it. And, can you then also alter their parenting behavior and improve their child, child-welfare outcomes?

Dr. Maholmes: That sounds like a tall order. What were some of the challenges of the study?

Dr. Oxford: Well, I think the biggest challenge is this population is a highly stressed population. So they're facing unemployment, low income, many of them are working multiple jobs and they have very hectic and demanding schedules. Many of them don't have transportation or reliable transportation. So we're really talking about families who have a lot of external stresses. And our providers, the individuals delivering the service, have to be really empathetic, flexible and compassionate towards individuals in their context. I think that was the most challenging aspect of the study. Once we got into the home and started the video reflection process because it is strength-based, parents felt safe to do the work, engaged in it. We had very low attrition rate.  So, once we got in, it was fine, but making those appointments, keeping the appointments, flexible scheduling, you know, some families, the only time they had to meet would be Saturday night or Sunday morning. So, that flexibility was built into the program and I think what contributed to its success, but also was a major challenge.

Dr. Maholmes: Indeed. Well, you've given us a wonderful set of results that you found. Are there any other key take-home messages for this work? Any other things that you'd like to share that I didn't ask you about?

Dr. Oxford: I do think the key take-home message is that we can provide high-quality intervention services that are brief, and, we believe, will be cost effective. We can really invest in the parent and child, really invest in supporting that relationship rather than just disrupting that relationship. It may be challenging, but it's worth the investment. We not only reduced their foster-care placement, we improved their sensitivity. So, what we found was this important ingredient that when parents were able to view themselves interacting with their baby, we have this 'aha' moment, where they can see, oh, that interaction was too much for my baby, or that pace that we did that game was too quick and now I can see and understand why my baby is crawling away from me. Rather than feeling rejected, I now understand my baby is crawling away because they're over-stimulated.

I think that, that is such an important feature of parent sensitivity and parent-child interaction. That really, we're providing enormous insight for the parent to have this opportunity to stand back and see their child. We did receive feedback that parents are applying this to other relationships. So one parent said she's using 'PFR," Promoting First Relationships,' with her husband and her other children. So we believe that the mechanism of change is generative; it enhances other relationships and, even after we're out of the home, we continued to see developments in this reflective capacity that parents have.

And that was one of the interesting findings that parent sensitivity continued to increase over the nine-month follow-up period. So, it wasn't like an immediate boost where they suddenly achieved a certain level and stopped. They continued to increase in their sensitivity over time. And that ultimately, we believe, will have really amazing long-term outcomes for the children.

Dr. Maholmes: Well this is very important research and I thank you so much for your time with us today. I've been speaking with Dr. Monica Oxford, lead researcher on a new study showing the promise of a home-intervention program for families under review by Child Protective Services. Dr. Oxford is a research professor in Family and Child Nursing at the University of Washington and Interim Director of the Barnard Center for Infant Mental Health and Development. Thanks again for joining us.

Dr. Oxford: Thank you. Thank you so much for having me.